As predicted, Amazon is updating its entry-level tablet.

The new 9th-gen Amazon Fire 7 tablet is still priced at $50, and it still packs a 7 inch, 1024 x 600 pixel IPS display. But Amazon has updated the specs for its budget tablet for the first time in two years.

The tablet ships with 16GB or 32GB of storage (up from the 8GB and 16GB options on the 2017 model), and Amazon says the 2019 version has a faster 1.3 GHz quad-core processor than its predecessor. 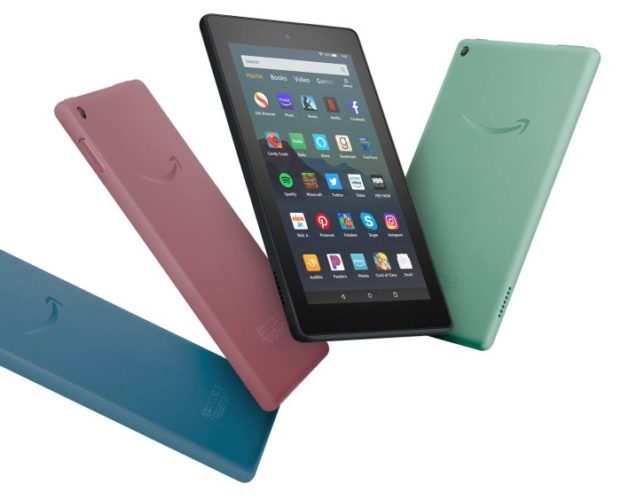 Amazon will offer the 2019 Fire 7 tablet in a choice of black, blue, plum, and sage (green) colors.

Other changes include support for microSD cards up to 512GB (up from the 256GB limit on the previous model), and the front-facing camera now supports 720p video chat or recording (up from 480p). There’s also an ambient light sensor in the new model.

But Amazon notes that while the new tablet has the same processor as its 8 inch sibling, it works in 32-bit mode on the smaller tablet and 64-bit mode on the larger model.

Not all of the updates are in the right direction — Amazon says the new Fire 7 tablet should get up to 7 hours of battery life. That’s an hour shorter than the 8 hours of estimated battery life for the previous-gen model.

The tablet has a 3.5mm audio jack and a built-in speaker as well a micro USB port, and it takes a good 4 hours of charging time to fully top up the battery when using the included 5W power adapter and USB 2.0 charging cable.

The Amazon Fire 7 tablet is up for pre-order starting today, and it has an estimated ship date of June 6th. Folks who order before then will also get $10 of credit to spend on apps and games from the Amazon Appstore.

Amazon is also offering an updated version of the Fire 7 Kids Edition with all the same changes mentioned above. You can pre-order one for $100 or buy a 2-pack for $150.

The Kids Edition model comes with a new version of Amazon’s sturdy, kid-proof bumper case featuring a kickstand. And while the normal Fire 7 tablet only has a 90-day limited warranty, the Fire 7 Kids Edition comes with a 2-year “worry free guarantee” that means Amazon will replace a broken device with no questions asked.

Customers also get a free 1-year subscription to Amazon FreeTime Unlimited with access to books, apps, and games for kids.