Amazon rolled out an updated version of the Kindle app for iOS this week… and then promptly updated the description to tell users not to install Kindle version 3.6.1 on an iPhone, iPod touch or iPad.

That’s because the update that was supposed to fix bugs actually added a major one: It deletes user’s books and settings. 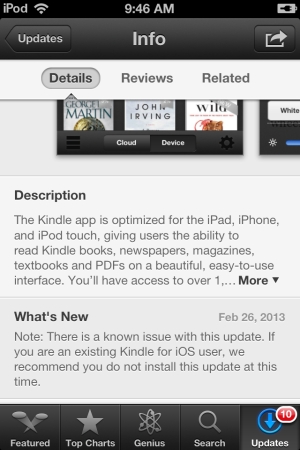 Users who had downloaded sample books (the first few chapters of some Kindle books are available to download for free) are pretty much out of luck, since these aren’t saved to your account. So if you downloaded a bunch of samples of books you might like to purchase at a later date and don’t remember the names of the books they might be gone forever.

In other words, if you haven’t updated the Kindle app on your iOS device yet… don’t.

You’ll want to wait for the next update to come along — and you might want to wait until user reviews start popping up in iTunes letting you know when it’s safe to install.

What’s annoying about this situation is that Kindle for iOS users will automatically see a notification on their iPhone, iPod touch, or iPad letting them know that an update is available — and folks who don’t read the release notes carefully might just go ahead and install the update out of habit.

via The Digital Reader and TechCrunch

One reply on “Amazon updates Kindle app for iOS, tells users not to install it”