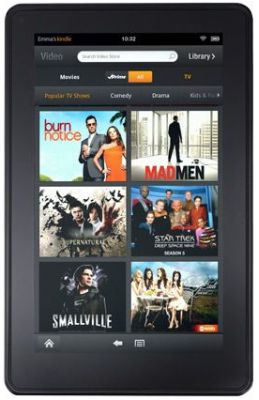 The Amazon Kindle Fire is different from any other Android tablet on the market because while it runs Android under the hood, it’s designed to be an Amazon device first and foremost. When you turn it on, you’re greeted with a bookshelf with your books, music, movies, and apps — not with customizeable Android home screens.

It comes preloaded with Amazon’s app store, music store, movie store, and kindle eBook store. But what if you want to run apps that aren’t available from those stores or change the software interface?

Amazon won’t try to stop you. A company official tells PC Magazine that he expects people to root the tablet and make changes.

That’s not to say Amazon will support rooted devices or make it easy for people to gain root access and change the functionality of the operating system. But while Apple tends to push out security updates for its mobile devices shortly after a new exploit is discovered by jailbreakers, Amazon doesn’t seem all that concerned.

It should be interesting to see whether Amazon’s streaming movie services continue to work once you root — one reason some companies tend to block access to rooted devices is that theoretically there are fewer checks in place to prevent you from downloading and saving content you’ve only paid to rent.

But it’s likely that Amazon will be selling the $199 Kindle Fire tablet at or near the price it costs to make the tablet with the hopes of locking customers into its digital media platform and making money by selling music, movies, books, and apps.

If you have no intention of buying those things from Amazon, the Kindle Fire might still be a worthwhile investment if you’re looking for a high quality tablet at a reasonably low price — especially if you can root it.

The Kindle Fire will have a 7 inch, 1024 x 600 pixel capacitive multitouch display, a 1 GHz TI OMAP4 dual core processor, 8GB Of storage, and an operating system based on Google Android 2.3 Gingerbread.

Even if you don’t root the tablet, Amazon says you’ll be able to install apps that aren’t available from the Amazon Appstore by side-loading them with a USB cable (or possibly by downloading them from the internet).

The Amazon Kindle Fire is expected to ship in November, but it’s already available for pre-order.

5 replies on “Amazon: Sure, you can root the Kindle Fire tablet”