Amazon Prime subscribers in the US get access to thousands of TV shows and movies with their $99 membership fee. But since late 2015 Amazon has also allowed you to add additional content from HBO, Showtime, Starz, and other networks through a service called Amazon Channels.

Now the company has launched the first channel with its own name in it: Anime Strike.

It’s an anime-streaming channel with a selection of animated Japanese TV shows and movies including current shows and classic titles. 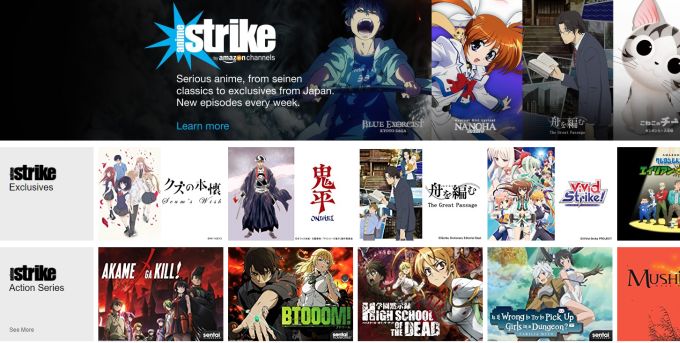 Anime Strike is an ad-free service, and new episodes of currently running shows will be added the same day they broadcast in Japan.

At $5 per month, Anime Strike is cheaper than competitors CrunchyRoll Premium  ($7 per month) or Funimation Streaming ($6 per month). But that’s only true if you’re already paying for an Amazon Prime membership.

It’s worth noting that Funimation and CrunchyRoll both offer free, ad-supported options, while Amazon does not.

According to Variety, Anime Strike is just the first Amazon-branded channel available Prime subscribers. The company plans to roll out additional channels starting this year.