Amazon regularly pushes out software updates for its Kindle eReaders, but for the release notes are usually pretty boring, consisting of “performance improvements, bug fixes, and other general enhancements.”

The latest update brings something new though: the biggest changes to the Kindle user interface in at least five years. It’s rolling out now to most Kindle devices released since 2016. Amazon says the new UI provides an “intuitive and easier Kindle experience,” although I suspect that while some folks will appreciate the changes, others will hate them. Update: I was right.

Probably the biggest changes in Kindle software version 5.13.7 have to do with the home screen and the top navigation bar. The home screen is now divided into two sections: Home and Library.

Home provides a peak at your library and reading lists, along with Amazon’s recommendations for content you might want to purchase. In previous versions of the Kindle software, this screen was optional and something you could disable if you just wanted to see your library of eBooks. Now it’s always on the Home screen, but there’s also a dedicated tab for accessing your Library.

The top navigation bar is now accessed by swiping down from the top of the screen, much as you would on a phone. This brings up quick settings including a screen brightness slider, Airplane mode, Bluetooth, and Dark Mode (on devices that support those features). This is also where you’ll find Sync and All Settings icons.

The top navigation when you’re reading an eBook has also been tweaked a bit, with a streamlined set of icons for font adjustments, searches, or accessing bookmarks or the table of contents.

And one change that I doubt anyone will complain about? When you choose the Device Info option from the Kindle Settings page, your device will actually tell you which Kindle you’re using. Previously this screen just showed you information about your firmware version, storage, serial number, and wireless network. Now it also shows the name and generation of your Kindle device – for example, my 2016 model would be listed as a Kindle Paperwhite (7th Generation) if it were running software version 5.13.7.

Unfortunately Amazon seems to be doing a phased rollout, because the new software isn’t yet available on my Kindle. If you’re in the same boat and/or want to see the changes before installing the update on your Kindle, Ars Technica has a series of screenshots showing most of the things that have changed. 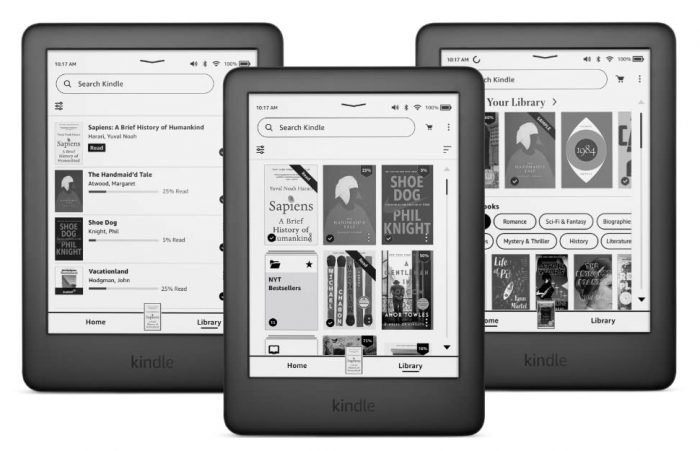 via Engadget and Ars Technica