Amazon and HBO have announced a deal to let Amazon Prime

subscribers stream select HBO shows including Boardwalk Empire, True Blood, and The Sopranos. But one of the most popular current HBO shows is still unavailable: You still need to be an HBO subscriber to watch Game of Thrones online (or you could buy individual episodes or seasons from Amazon, iTunes, Google Play, or other stores).

For the most part, this deal covers HBO content that’s more than three years old. Older episodes of newer shows like The Newsroom, Girls, and Veep will become available about three years after they air. 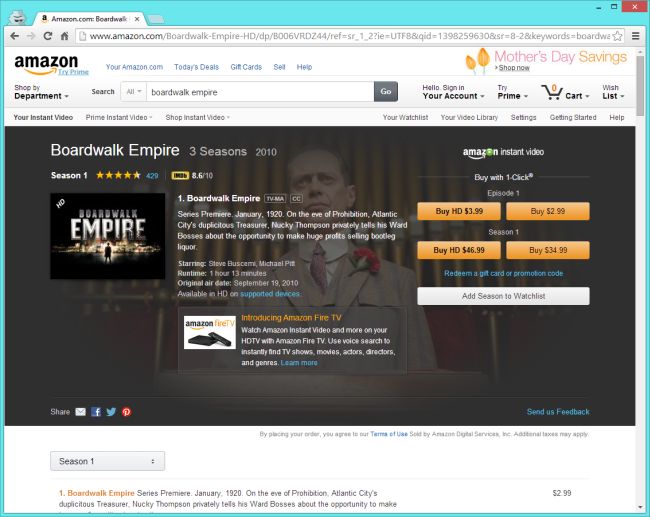 The first HBO shows should start hitting Amazon Prime Instant Video on May 21st. And while the partnership won’t necessarily let you stay up-to-date with the latest episodes, it’s good news for cable cutters who might be a bit behind on their TV viewing.

I’ve been meaning to watch the Sopranos and The Wire for years, but haven’t wanted to sign up for cable TV or buy the DVDs. Soon every episode of each series will be available as part of the same subscription service that lets me get free 2-day shipping on Amazon purchases, borrow an eBook a month from the Kindle Owners Lending Library, and offers access to thousands of hours of movies and TV shows from other providers.

Some other HBO shows coming to Amazon include Six Feet Under, Big Love, Eastbound & Down, Oz, Band of Brothers, Deadwood, Angels in America, John Adams, Flight of the Conchords, Enlightened, and movies and documentaries including Ghosts of Abu Ghraib, When the Levees Broke, and Game Change.

If you are an HBO subscriber, Amazon has announced another perk: HBO Go will be available on the Fire TV by the end of the year, offering users access to 1,700 titles including HBO TV shows, miniseries, sports events, and original films.