Willing to put up with some ads and Amazon apps pre-loaded on your smartphone in order to save up to $50? For the past year or so Amazon has been selling a handful of “Prime Exclusive” phones which fit that description.

Now Amazon is adding two new models to the lineup: the recently announced Moto G5 Plus and the Alcatel A30. 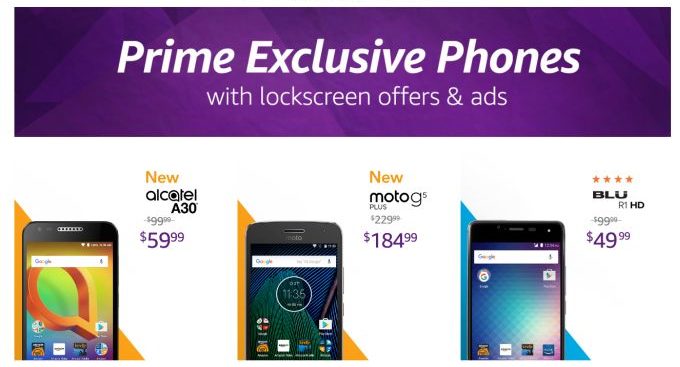 Both phones are up for pre-order now, with the Moto G5 Plus expected to begin shipping on March 31st, and the Alcatel A30 coming April 19th.

While the $60 phone might seem attractive based on its price, it’s actually not the cheapest Prime Exclusive phone. That award still goes to the BLU R1 HD, which Amazon started selling in 2016 for $50 and up. But at that price you only get a phone with 1GB of RAM and 8GB of storage.

The Alcatel A30 has twice as much memory and storage… which is what you also get if you pay $60 for a slightly better version of the BLU R1 HD. One major difference between the two phones, though, is that the Alcatel model has a Qualcomm Snapdragon 210 processor, while the BLU phone had a MediaTek 6735 chip.

Motorola’s G5 Plus, meanwhile, might not be quite as cheap… but it’s receiving high marks from reviewers. The Verge says it’s “an outstanding phone for the money,” and Ars Technica calls it “the king of budget Android,” with both sites referring to the full price of $229.

You can also opt for a model with 4GB of RAM and 64GB of storage. That version has a list price of $300, but the Amazon Prime Exclusive version sells for $240.