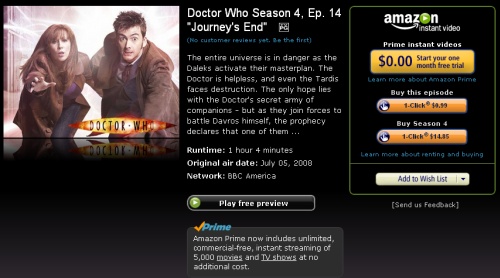 Amazon has rolled out a major update to its Amazon Prime

service. Customers in the US can still pay $79 per year to get free 2-day shipping on most orders. But now users can also stream over 5,000 TV shows and movies from the Amazon Instant Video service.

Not every title available for purchase or rental from Amazon’s Instant Video library is included. But there is a pretty good selection of programs, including some top notch BBC programming such as Doctor Who

The latest seasons of some shows aren’t included in the deal, so you’ll still have to pony up some cash if you want to watch Doctor Who Series 5, for instance. And while there are some excellent movies in the mix, you won’t find a lot of current blockbuster titles.

That said, $79 per year breaks down to just about $6.58 per month, making Amazon Prime cheaper than either Netflix or Hulu. And as an added bonus you still get free shipping on purchases from Amazon — a feature that’s impossible for most online video providers to offer, even if Amazon doesn’t include quite as much content yet.

While you can access the Instant Video  service using any device with a supported web browser, Roku has already announced support for the new Amazon Prime service, which means Prime customers can pay as little as $59.99 for a set top bo that will let them stream Amazon Prime, Netflix, and/or Hulu Plus content to a TV.

You can find a list of Prime Eligible movies

via Engadget and The Next Web

One reply on “Amazon Prime customers can now stream 5,000 movies and TV shows”