Amazon’s new music service is live. It’s called Amazon Music Unlimited, and subscribers get access to “tens of millions” of songs and thousands of curated playlists and personalized stations.

Here’s one big difference: the pricing. Some customers will be able to sign up for as little as $4 per month.

Have an Amazon Echo, Echo Dot, or Amazon Tap? Then you can sign up for Music Unlimited for $4 per month. There’s one small catch: you’ll only be able to stream music to that single device.

Want an actual unlimited plan? If you’re an Amazon Prime member you can sign up for Music Unlimited for $8 per month or $79 per year. That’s on top of the $99 per year you’re probably already paying for Prime membership (which also includes free 2-day shipping, movie and TV show streaming, and other perks, like access to the new Prime Reading library of more than a thousand Kindle eBooks).

Like most of the companies competing in this space, Amazon offers an all-you-can-stream $10/month plan for folks who aren’t Prime members. But honestly, I’m not sure why you’d choose Amazon Music Unlimited as over one of its rivals unless you are a Prime member… at least as an individual subscriber.

Amazon says it’ll also launch one more pricing tier later this year: a family plan that lets up to 6 people share Amazon Music Unlimited for $15 per month or $149 per year.

Sure, other companies also offer family plans for similar monthly prices, but Amazon is one of the only companies I’m aware of that essentially gives you two months free if you pay for a full year in advance.

Amazon has also redesigned its music apps for Android, iOS, and desktop and added new controls to the Alexa voice assistant, allowing you to ask an Amazon Echo or related product to do things like “play happy music” to choose an appropriate playlist. 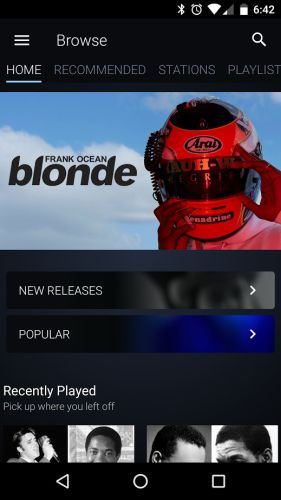 Alexa can also start streaming songs from an artist when you just ask for that artist by name by saying something like “Alexa, play David Bowie.” Want to play a song, but don’t remember the title or artist? You can ask Alexa to play a song by quoting some lyrics like “Alexa, play the song that goes, ‘I was doing just fine before I met you'”.

And Alexa learns from your listening behavior: not everyone has the same tastes in music, so if you ask it to play “running music,” for instance, some users might get a playlist of up-tempo indie rock, while someone else might get hip hop, metal, or pop.

Amazon Music Unlimited is available in the United States at launch. But it’s coming to the UK, Germany, and Austria by the end of 2017.