Amazon has added a premium tier to its music streaming service: the new Amazon Music HD lets you stream lossless audio at up to 24-bit/192 kHz quality.

The service is compatible with most iOS and Android devices launched since 2014, most Amazon Fire tablets, Fire TV devices, and 2nd-gen or later Echo devices), and many other products including PCs, sound bars, and home speaker systems.

Amazon Music HD is also available in the UK, German, and Japan at launch. 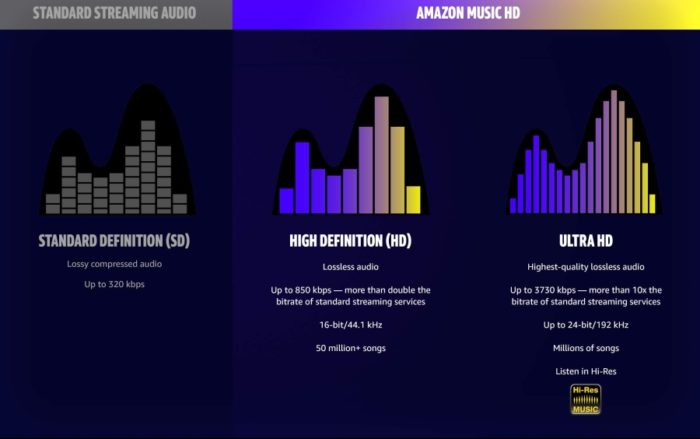 That means the Amazon Music HD will run you $5 more than the price of an Amazon Music Unlimited subscription. But you’ll also probably want to make sure you’ve got decent audio hardware if you want to be able to tell the difference between standard audio and what Amazon calls “HD” and “Ultra HD” audio.

Here’s how Amazon describes the difference between what it calls SD, HD, and Ultra HD audio:

While the company is using terms that are typically reserved for video rather than audio, The Verge notes that they were chosen because they’re familiar words that will likely make sense to folks who aren’t already audio geeks. Whether they’ll appeal to those folks and convince them to spend more money on higher-quality streams may be another story.

Anyway, Amazon says a typical 3.5 minute song takes up about 9MB of disc space in SD, 51MB in HD, and 153MB in Ultra HD. Amazon says you’ll probably want an internet connection of at least 5-10 Mbps for Ultra HD streaming.

Amazon says it has 50-million songs available in HD format, and “millions” in Ultra HD.

While Amazon isn’t the first company to go after the hi-fi streaming space, Amazon Music HD appears to be undercutting its rivals on price.

Tidal, Deezer, and QoBuz each charge $20 per month for hi-fi music streaming. And industry leaders including Spotify and Apple Music don’t offer a high-resolution audio option at all.

One thing Amazon doesn’t seem to be offering is a single-device plan: Amazon Echo and Fire TV owners have the option of signing up for an Amazon Music Unlimited subscription for as little as $3.99 per month. But unless you’re planning on running a line out from your Echo to a set of high-quality speakers or headphones, you probably wouldn’t notice much difference between SD and HD/UHD audio.

One reply on “Amazon Music HD provides lossless streaming starting at $12.99 per month”