Amazon really wants you to use its Alexa voice assistant. The service, which first debuted on the Amazon Echo speaker in 2014 is now available on Amazon tablets, TV boxes, and third-party hardware and the company also offers Alexa apps for Android and iOS.

Now Amazon has also added Alexa to its Amazon Music app for phones and tablets, giving you a way to find and play music using your voice… and to get used to the idea of using Alexa. 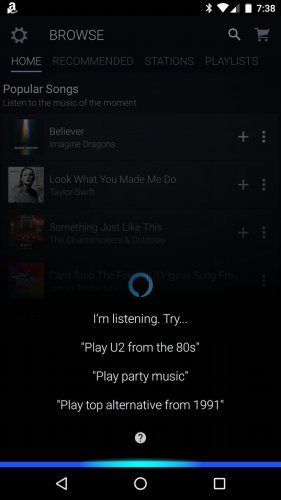 There’s a new Alexa button on the home screen that you can press before speaking, and you can also hit an Alexa icon from the now playing screen.

Suggested voice actions include things like “play party music,” “play popular Coldplay songs,” and “play exercise music.” You can also search for music by artist or song. And you can also use your voice to play or pause music… but that’s a kind of silly thing to do since you have to press the Alexa button before speaking. Pressing the play/pause button would probably be faster.

Alexa in Amazon Music isn’t limited to music requests. I also asked Alexa for the weather and it gave me a brief forecast, and asked it to tell me a joke, to which it replied “a man in a limbo contest walked into a bar… he was immediately disqualified.”

Amazon says Alexa in Amazon Music is available in the US, UK, Germany, and Austria.