Amazon launched its first $50 Fire tablet in 2015. Now the company is giving its cheapest tablet an update.

The new model has the same price and similar specs, but it sports a slimmer and lighter body, dual-band WiFi, and Amazon says the new model offers up to 8 hours of battery life, which is an hour more than you get from the older model. 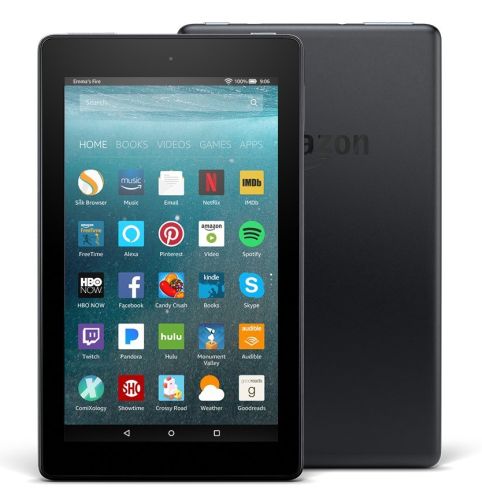 Other features include a 2MP rear camera, a front-facing VGA camera. a 3.5mm audio jack, a micro USB 2.0 port, dual-band 802.11n WiFi, Bluetooth, and a speaker.

Aside from the battery life improvement, the biggest difference between this year’s model and the one it replaces is the size… although the difference isn’t actually all that great:

Amazon also says the new model’s display has “higher contrast and sharper text,” which is a bit strange since it’s the same size and resolution as the original. Perhaps Amazon went with a higher-quality display panel. Or maybe the differences are due to software changes.

There’s also a new Amazon Fire 7 Kids Edition tablet with a starting price of $100 for a model with 16GB of storage, a 1-year subscription to Amazon FreeTime Unlimited, a rugged case, and a 2-year “worry-free guarantee.”

Amazon’s new entry-level tablet is available in black, yellow, blue and red, and the base price is for a model with “Special Offers.” If you’d prefer not to see ads on the lock screen you can pay an extra $15. Or you could just buy Barnes & Noble’s $50 tablet, which has similar specs but ships with the Google Play Store rather than the Amazon Appstore.