It’s not a new Fire TV, but Amazon has a new gadget. The company’s new Amazon Echo Dot Kids Edition is basically the same as a regular Echo Dot, but it comes with a kid-friendly protective case, a 2-year “worry-free guarantee” that means Amazon will replace broken units, no questions asked, and parental controls.

Priced at $80, the new model is a bit pricier than the regular $50 Echo Dot. But those extra features might be worth the extra cost for parents of young kids… if they think giving a kid an Echo Dot is a good idea in the first place.

Amazon is also launching a new FreeTime Unlimited on Alexa service with prices starting at $3 per month for Prime members. 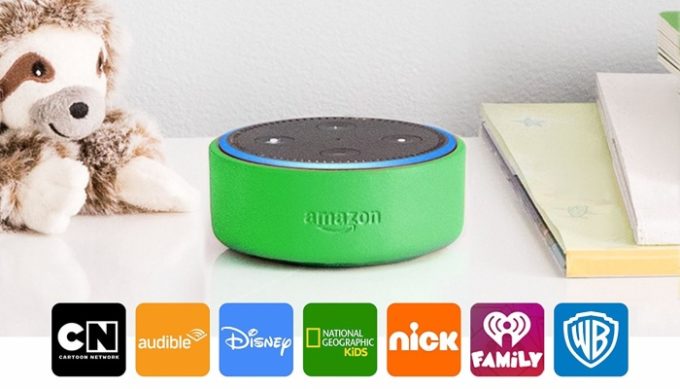 Subscribers to Amazon FreeTime Unlimited on Alexa get access to age-appropriate content including ad-free radio stations and music playlists, more than 300 audiobooks, and Alexa skills from Disney, Nickelodeon, and others.

FreeTime Unlimited on Alexa isn’t just for the new Echo Dot for Kids. It should work with any Echo device. And if you’re already paying for FreeTime Unlimited for, say, a Fire Tablet Kids Edition, then you get the new Alexa features for no additional cost.

Speaking to The Verge, Amazon representatives say the FreeTime Unlimited on Alexa features are mostly tailored for kids who are between 5 and 12 years old, with many of the kid-friendly Alexa skills tailored for 5-9 year olds.

If you don’t need the subscription service, but just want to use parental controls on an Alexa device, you can use Amazon’s basic FreeTime service, which lets you set restrictions on the times kids can interact with Alexa, block explicit songs from playing, disable the ability to make purchases through Alexa, or decide which Alexa skills your kids can use, among other things.

A lot of those things will make the Echo Dot Kids Edition less useful for adults, so this probably isn’t a gadget you’re going to want to use throughout the house. But it might be something you could put in your kid’s room for use in those moments when you don’t have it in you to read the same book 12 times in a row, but you’d rather not just plop the little one in front of a TV.

The new Echo Dot Kids Edition is up for pre-order for $80 and starts shipping May 9th. Amazon FreeTime on Alexa will be available to anyone with an Echo, Echo Dot, or Echo Plus through a software update that rolls out the same day.