Amazon is updating its top-of-the-line Kindle eReader with a new model sporting a bigger screen, a lower price, and support for listening to audiobook from Amazon’s Audible service (when paired with Bluetooth speakers or headphones).

The new Kindle Oasis is up for pre-order today for $250 and it ships starting October 31st. 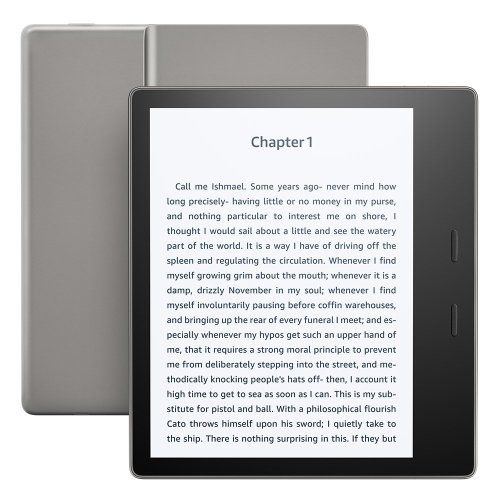 That’s actually just the entry-level price though. For $250 you get a WiFi-only Kindle Oasis with 8GB of storage and “special offers,” which is Amazon’s euphemism for ads in the user interface.

While 8GB should be plenty of storage for eBooks, it’s not enough for a huge library of audiobooks. So Amazon also offers a 32GB model. You can also pay more for a model with cellular connectivity or to remove special offers. Here’s a run-down of the prices:

The 2017 Kindle Oasis is Amazon’s first waterproof Kindle… even though it’s the second-gen Oasis and a lot of folks had assumed, based on the name, that last year’s model would be waterproof. Amazon says it should be able to withstand up to 60 minutes in water at a depth of up to two meters (about 6.6 feet).

The eReader has a display with 300 pixels per inch, 12 LED lights for evenly illuminating the screen, and it has a touchscreen display plus physical page turn buttons on the side.

While the original Kindle Oasis had two batteries: one built into the eReader and a second in a detachable cover/case, the new model just has a battery in the device itself, which should lead to longer battery life for folks who prefer not to use a cover.

This is very much an eReader aimed at hardcore fans of eBook readers with E Ink displays. More casual readers can already get a pretty good experience using a Kindle device that’s less than half the price… or just opt for a tablet: Amazon sells models for as little as $50.

But the Kindle Oasis has the biggest screen of any current Kindle, the best illumination, and it’s the only model from the company that’s waterproof.

Of course, if that’s your primary concern, there are other options. Kobo sells waterproof eReaders for as little as $160. But if you have a collection of Kindle eBooks you may need to convert them to ePub or another format supported by the Kobo platform if you want to go that route.

Along with the new Kindle Oasis, Amazon is introducing new Kindle software with additional font sizes and boldness levels and new accessibility options (including the ability to show light text on a dark screen). Those features should start rolling out soon to other devices including most Kindle eReaders released in the past 4 years.