As expected, Amazon is expanding its line of Kindle eReaders with a new model called the Kindle Voyage. It’s a $199 device with a high-resolution, front-lit display, a touchscreen, and touch sensors built into the sides of the display so you can turn pages without putting your finger over the screen. 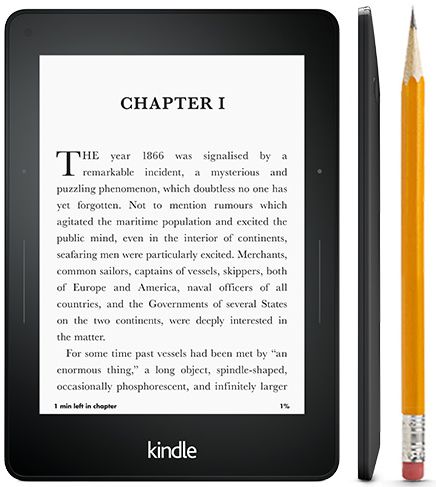 The Amazon Kindle Voyage features a 6 inch grayscale display with 300 pixels per inch. It has 4GB of built-in storage, supports 802.11n WiFi, and there’s a $269 3G model which lets you download eBooks for free when you’re away from WiFi.

Amazon continues to offer the Kindle Paperwhite for $119 and there’s a new entry-level Kindle with a touchscreen and a starting price of $79. If you opt for the Voyage what you get is a thinner device with a higher-resolution display, touch sensors on the sides, and a matte glass screen that sits flush with the bezel.

It also has an adaptive light sensor and a brighter front light. Amazon says it’s 39 percent brighter than its predecessors, but you can adjust the settings and it’ll also adjust the illumination level automatically. For instance, if you’re reading in the dark for 30 minutes, the screen will be a bit dimmer toward the end of your reading session because Amazon figures your eyes will have gotten used to the dark.

Amazon isn’t the only company selling eReaders with high-resolution displays. The Kobo Aura H2O features a 6.8 inch, 265 ppi screen and it’s available for pre-order for $180. While that model might not have a screen quite as sharp as that on the Kindle Voyage, the Kobo Aura H2O does have at least one other trick up its sleeve: it’s waterproof.

One reply on “Amazon Kindle Voyage eReader now available for $199”