Amazon appears to prepping the launch of a new subscription-based eBook service called Kindle Unlimited. For $9.99 per month, subscribers would get access to a library of 600,000 eBooks and thousand of audiobooks.

The company already has a Kindle Owners’ Lending Library which lets customers with a Kindle eReader or tablet and an Amazon Prime membership read up to 1 book per month for no additional charge.

Kindle Unlimited seems to be more of an all-you-can-read service which may even be available to folks who don’t own a Kindle, but use the Kindle apps on other devices such as iPads or Android or Windows tablets. 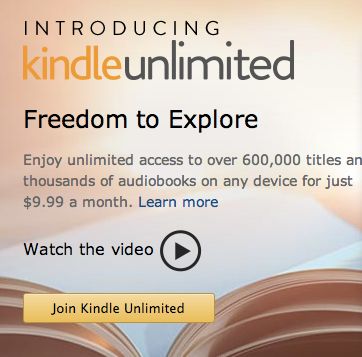 Authors started to notice evidence of the Kindle Unlimited program on Amazon’s website early in the morning of July 16th, before Amazon had officially made any announcements. The page was quickly removed, but you can still see evidence of Kindle Unlmited in an Amazon page that includes a “KU” search link.

Amazon wouldn’t be the first company to offer a Netflix-for-books style all-you-can-read subscription program. Oyster and Scribd already offer similar services. But Amazon is the 800 pound gorilla in the eBook world, and while Amazon’s entry into the space wouldn’t necessarily put the competition out of business, it could dramatically change the way many people shop for eBooks.

A lot will depend on the titles that are available from the service. Authors of best-selling novels and works of non-fiction might prefer to sell their books individually rather than offering them as part of a subscription bundle. But lesser-known authors might find new readers if they’re included in Amazon’s content library.

Amazon, meanwhile, might end up getting some people who might not otherwise spend $120 per year on eBooks to pony up some money for reading material while avid readers who zip through more than a few books per month might take advantage of the program to save money.

For now it looks like the list of books included in Kindle Unlimited is pretty much the same as the content available from the Kindle Owners’ Lending Library. Both programs could get a boost if authors decide there’s revenue to be had and agree to include more books in the programs.

via The Digital Reader and GigaOm