Amazon’s Kindle Unlimited Service is now live. Pay $9.99 per month and you can read any of the more than 600 thousand eBooks or listen to 2 thousand Audible audiobooks.

Want to read a book at home but listen while you’re commuting to work? Amazon’s Whispersync will keep track of your progress in a Kindle eBook and sync it with an Audible audiobook, letting you switch between reading and listening. 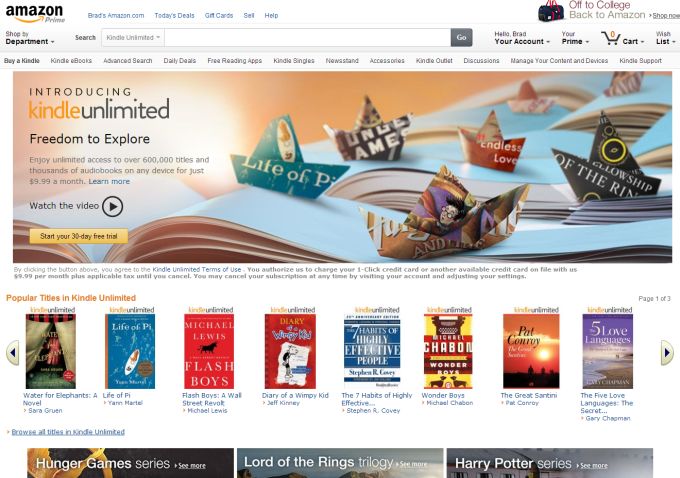 We saw evidence of Kindle Unlimited a few days ago, but the service is now live for customers in the United States. You can take it for a test drive before spending any cash, thanks to a 30-day free trial period.

Amazon isn’t the first company to offer a Netflix-for-books service. Oyster and Scribd have been at it for a while. But Amazon has a large library, an enormous existing user base, and (sometimes rocky) relationship with publishers. Those companies are now competing directly with Amazon, but they’ve both released statements suggesting that this helps popularize their business model and could be good news for everyone.

Popular titles included in the Kindle Unlimited content library includes the Lord of the Rings triology, the Harry Potter series, the Hunger Games trilogy, Water for Elephants, the Princess Bride, and more.

Odds are folks who were already spending more than $10 per month on books will find plenty of content to read. Odds are if you aren’t already an avid reader, there’s not a lot of reason to spend $120 a year on books you probably still won’t read.

If the content available through Kindle Unlimited looks familiar, you may already be an Amazon Prime subscriber own a Kindle eReader or Kindle Fire tablet: the eBooks library seems to be pretty much the same as what you can get from the Kindle Owners’ Lending Library. That service lets Kindle owners who pay $99 per year for an Amazon Prime membership read up to one book a month for no extra fee.

Kindle Unlimited is a separate service that includes audiobooks and lets you read as much or as little as you’d like. And unlike the Kindle Owners’ Lending Library, Kindle Unlimited works with Amazon’ Kindle reading apps for iOS, Android, Windows, BlackBerry, OS X, and Windows Phone. You don’t need to own a Kindle to use the service.

When you sign up for Kindle Unlimited you also get a 3-month free membership to Audible.com which lets you access 150 thousand audiobooks.

Of course the service doesn’t include other Prime perks such as Amazon Prime Instant Video, Amazon Prime Music, or free 2-day shipping on millions of items.

10 replies on “Amazon Kindle Unlimited: All-you-can-read (or hear) for $10 per month”