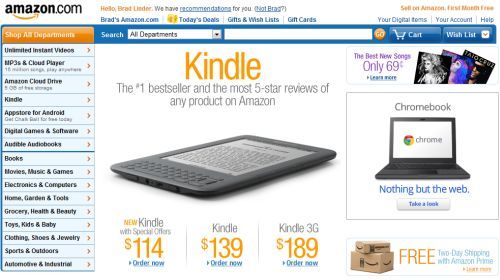 Amazon is rumored to be working on a line of tablets that will be bundled with the company’s Kindle eBook service, Amazon MP3 music service, and the Amazon Appstore. Last we’d heard Amazon was preparing to launch a 7 inch tablet in October, with a 10 inch model set to follow early next year.

Now TechCrunch’s MG Seigler reports that at least the 7 inch tablet is real — and he’s already played with it, although he wasn’t permitted to take any pictures.

Here’s what he has to say about the tablet:

Like the NOOK Color, Siegler says the Amazon Kindle won’t look like other Android tablets. The operating system has been customized with a special user interface to highlight books, movies, music, and apps.

If you were hoping the Kindle would be the first budget tablet with Google’s Honeycomb user interface, it looks like you’re out of luck. The software is based on an earlier build of Android. But I suspect we’ll see custom ROMs for the tablet in no time.

That said, I’m surprised how frequently I hear about people rooting their Barnes & Noble NOOK Color devices or installing a custom ROM and dual-booting into the B&N interface and a full Android desktop… only to find that they use the default NOOK Color UI far more often than the Android version.

There’s something to be said for a well thought-out user experience that’s purpose designed for the device you’re holding in your hand. One of the things that probably makes Apple iPad fans love the tablet so much is the fact that the hardware and software were designed by the same people, and designed to work together (just like the iPhone, MacBook, and other Apple products). That’s something few Android devices really offer, although Samsung, HTC, and other companies definitely try to slap their own experience on top of Android. So far only Barnes & Noble has truly made Android its own, and it looks like Amazon is next.

The difference is that while the NOOK Color is designed first and foremost as an eReader, Amazon stopped just being a book store a long time ago. It’s tablet will be aimed at apps, music, movies, and books… pretty much everything you’re likely to want to use a tablet for.

Siegler doesn’t have all the hardware specs at the moment, but for now it looks like the tablet will have a single core processor, around 6GB of storage, and WiFi. There’s no camera, and currently no 3G version, but that could change.