Amazon’s next Kindle eReader is coming soon, and Amazon CEO Jeff Bezos has said that the 8th-gen Kindle will be a “top of the line” device. While the company hasn’t made an official announcement yet, a listing at Chinese retail outlet TMall may have just spilled the beans.

Update: The web page has been removed, but details were confirmed by a page on Amazon’s Canadian website (which has also been removed).

Update 2: The Kindle Oasis is now available from Amazon for $290.

The Kindle Oasis features a brand new design with built-in page turn buttons on one side of the screen, and an accelerometer that allows the screen to auatomatically rotate 180 degrees so that the buttons will be on either the left or right side. 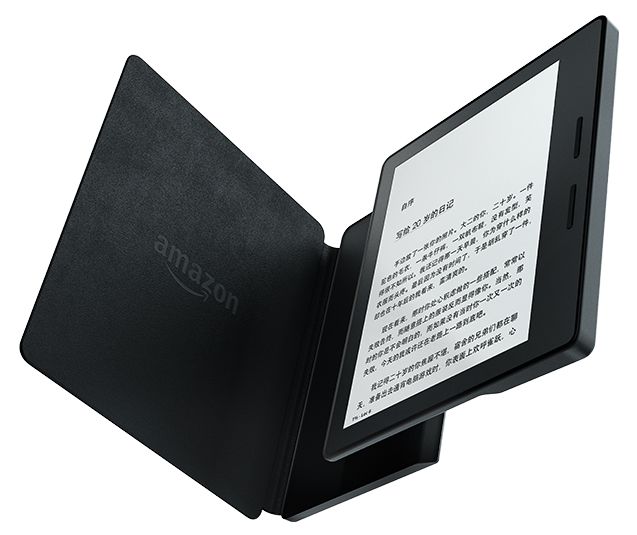 The eReader also has a wedge-shaped design. It’s fatter on one side than the other, presumably because there’s only a battery on the side of the device with the page-turn buttons.

Want longer battery life? Or maybe you just want the back of the Kindle to be flat? No problem. Amazon offers a case with a built-in battery that fits together with the Kindle Oasis like a glove.

With the case connected, you should be able to get longer battery life. There’s also a flip cover that can protect the screen when you’re not using the Kindle.

Many of the details are in Chinese, but from what I can make out, the Kindle Oasis has a screen with 300 pixels per inch, an LED backlight, and the eReader measures 3.4mm thick and the thinnest point ant 8.5mm at its thickest, and I think it weighs about 131 grams (less than 5 ounces).

Update: According to redditor defan752, here are some of the details that I couldn’t initially translate:

via MobileRead and The eBook Reader