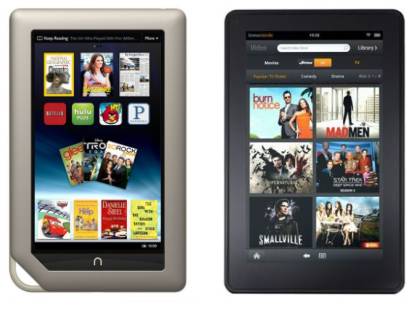 The two biggest names in eBooks will begin offering new tablets for reading books, watching movies, listening to music and running apps this month. Both feature 7 inch, 1024 x 600 pixel displays and run modified versions of Google Android. They’ll also both be dirt cheap by iPad or even Android tablet standards.

Amazon’s Kindle Fire is available for pre-order for $199

But there are a number of things setting the Amazon Kindle Fire and Barnes & Noble NOOK Tablet apart. The B&N model costs more, but offers more memory and storage and has a faster processor than the Kindle Fire. But Amazon offers a wider selection of content for its devices and a stellar system for keeping your media synchronized across devices.

The hardware specs paint a certain picture… but the services bundled with each tablet, along with overall performance may paint another.

There’s probably no right answer to the obvious question “which one should I get?” But let’s take a look at some of the pros and cons of each device

Amazon’s tablet also uses the Amazon Silk web browser, which offers faster browsing by using remote servers to pre-render some content. I’m not counting this as a pro or con, because you have to weight the performance enhancement against the privacy implications — but it is a special feature.

Barnes & Noble also claims that the NOOK Tablet has better screen viewing angles than the Kindle Fire, but I haven’t put that to the test yet, so I can neither confirm nor deny the truth of that claim.

Neither tablet will offer access to the official Google Android Market, but each will have its own app store. Neither has a camera. Neither is really meant to compete with the Apple iPad, Motorola XOOM, or Samsung Galaxy Tab line of products.

Instead, these are media consumption devices that can also run a number of apps. Amazon’s tablet probably won’t be as easy to hack as Barnes & Noble’s, but Amazon officials have suggested that they don’t really have a problem with users rooting their tablet.

For those that don’t care about the SD card or memory or storage, Amazon’s tablet has a lot going for it including tight integration with Amazon’s digital book and movie services as well as its Whispersync technology for keeping data synchronized between devices.

Which tablet would you rather buy?