It’ s a 7 inch tablet with a full HD display, a speedy Qualcomm Snapdragon 800 quad-core processor, 2GB of RAM, a front-facing camera, and a starting price of $229

But is it worth buying? The initial reviews look pretty good… if you’re happy living in Amazon’s app and media ecosystem. 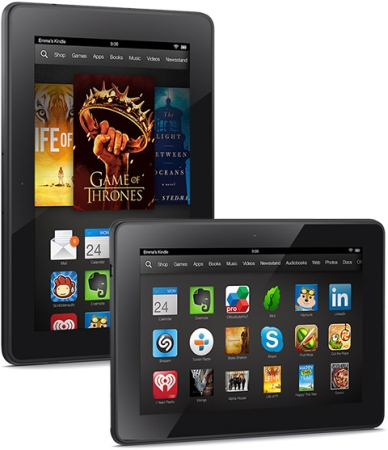 The biggest challenge Amazon continues to face is the fact that there aren’t as many apps in the Amazon Appstore as there are in the Google Play Store (which is where you get apps on most other Android tablets). Quality is more important than quantity, but if some of the apps you want aren’t in the store, then it’s hard to argue that the quality is there.

Still, there are tens of thousands of apps available for this tablet and Amazon includes its own software solutions that might sweeten the deal for some, including an excellent Kindle reading experience (with support for text-to-speech — something you don’t get with the Kindle Paperwhite), premium features for Amazon Prime subscribers including the ability to stream and even download Amazon Instant Video content for no additional charge, and more.

Amazon has also rolled out a crazy new support feature called Mayday which lets you tap a button to get live support within 15 seconds. A video window will pop up and a support rep will help you with your problems, even taking control of your device or drawing on your screen if you give permission.

While tech-savvy users might just want to buy this tablet for its specs, root it, and try to install a custom ROM, that Mayday service could be awfully attractive for folks who just want a device to read books and watch movies, and who can’t figure out, for instance, why they can’t get their library books to load properly or how to set up an email account.

Mayday will probably see the most use around the holidays, when new tablet owners are opening their presents.

Reviewers were impressed with the tablet’s speed and battery life (around 10 to 11 hours of run time).

Here are some of the highlights of recent reviews.

There are a lot of videos in the links above, but SlashGear’s video demonstrating the Mayday service is one of the most informative. While many folks might wonder why they should opt for a Kindle Fire HDX 7 when it’s the same price as the Google Nexus 7 and has similar specs, this video shows just how much better Amazon’s tablet may be for people who are a little less comfortable with technology… or who just like talking to strangers.