With a starting price of $199, it might be cheaper and easier to buy a new Kindle Fire HD 7 inch tablet if anything goes wrong on yours than it is to replace a broken touchscreen. But if you’re the sort of person that likes to fix things yourself, it looks like the Kindle Fire HD is relatively easy to disassemble and reassemble.

The folks at iFixit tore one apart to see what’s on the inside — and how hard it would be to put it open up and put back together again. 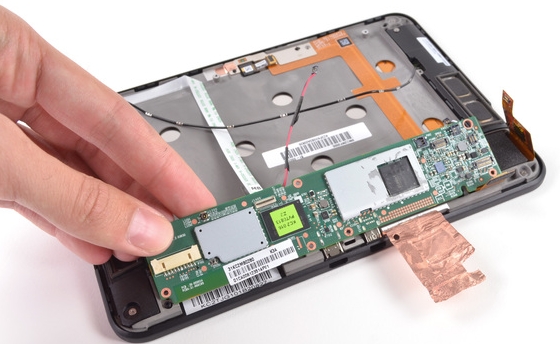 Long story short? There are no surprising hardware choices under the hood, but the good news is that it’s pretty easy to get under the hood using a case opening tool.

As for repairability, the headphone jack is easy to remove and replace, and the WiFi antenna is easy to move. So it should be both cheap and easy to fix problems with those components.

On the other hand, the LCD and glass panel are fused together, which means you can’t replace one without the other — which drives up the cost.

Overall, the new Kindle Fire HD 7 inch tablet seems relatively accessible to hardware hacks. Software hackers, on the other hand, have a tougher time ahead of them thanks to the Kindle Fire HD’s locked bootloader.