On the other hand if you haven’t yet placed an order, you have a few weeks to wait. Amazon is showing an estimated ship date of December 3rd for new orders. 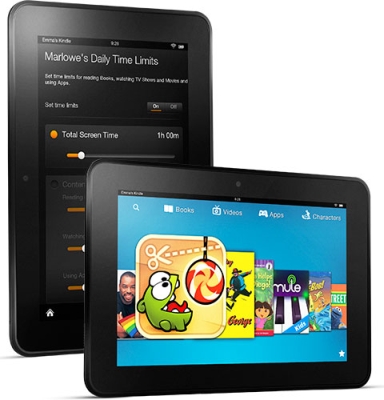 The new 8.9 inch Kindle Fire runs a customized version of Google Android 4.0 designed to work with Amazon’s music, movie, book, and app stores. It doesn’t look much like Android for other devices, and if you want to install apps from the Google Play Store you’ll have to hope it’s as easy to root the 8.9 inch tablet and install it yourself as it is on the Kindle Fire HD 7 inch tablet.

There are a few perks to using Amazon’s software. You get access to the Kindle Owners’ Lending Library, for one thing. That’s the service that lets Amazon Prime subscribers “borrow” up to one book a month from Amazon’s pretty extensive library of digital books.

Amazon also hasn’t yet released an official Instant Video app for Android, which means that if you want to stream movies and TV shows from Amazon you’ll either need to be running Amazon’s official software or find yourself a hacked version of the Instant Video app.

Amazon offers a $299 version of the Kindle Fire 8.9 with 16GB of storage and “special offers,” also known as ads that show up on the home screen and lock screen.  You can pay an extra $15 to remove the offers.

Amazon is still taking pre-orders for the Kindle Fire HD 8.9 with 4G LT

for $499 and up. That model is expected to ship starting November 20th.