For the last few years Amazon has been been offering a text-to-speech option in some Kindle eReaders. This lets you listen to books by plugging in a set of headphones or by using the speakers in a Kindle Keyboard or Kindle Touch.

What’s cool is that this works with almost any eBook because the Kindle software converts text to speech. You don’t need to pay extra for an audiobook. 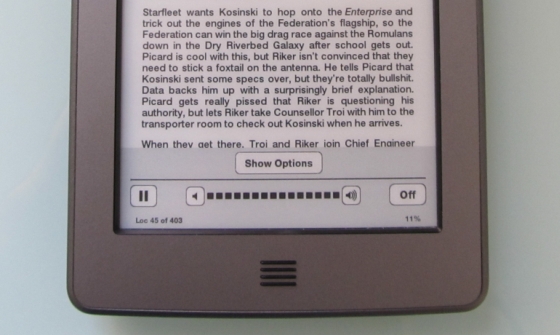 In fact, the new Amazon Kindle Paperwhite doesn’t even have a speaker or headphone jack. So you won’t be able to listen to MP3s either. That’s a feature some older Kindle models supported.

To be fair, both text-to-speech and MP3 playback were always described as “experimental” features, which suggested two things: They might still be buggy, and Amazon could kill the features at any time.

Text-to-speech also isn’t all that great on older Kindles. Instead of listening to a voice actor performing a dramatic reading of a book with, you get a digital voice that mispronounces words, struggles to pause correctly at punctuation marks, and mangles proper nouns.

But since I picked up a Kindle Touch 10 months ago, I’ve found myself using the feature more often than I would have expected. It lets you “read” a book when you’re in a situation where it might otherwise be difficult. For instance, when you’re bobbing up and down on an exercise machine, or when you’re riding a bus (if, like me, you get motion sick when trying to read a book on a bus).

Text-to-speech also allows people with visual impairments listen to books that don’t have an official audiobook version, including many out of print titles or independent releases.

While many Kindle readers won’t miss this feature, it was one of the things that helped set Amazon’s eReaders apart from the competition.

I guess Amazon is counting on the new paperwhite screen, higher resolution display, and glow light to do that now.

Meanwhile if you need text-to-speech, Amazon still offers the Kindle Keyboard3G for $139

. You can also find plenty of new and used Kindle Touch models on eBay.