Amazon has finally brought its online video service to Google Android. You can now stream movies and TV shows from Amazon Instant Video on an Android phone or tablet. That includes any videos you’ve purchased or rented from Amazon as well as thousands of videos that are available to Amazon Prime subscribers.

Using Amazon Instant Video on Android isn’t quite as simple as installing a single app though. 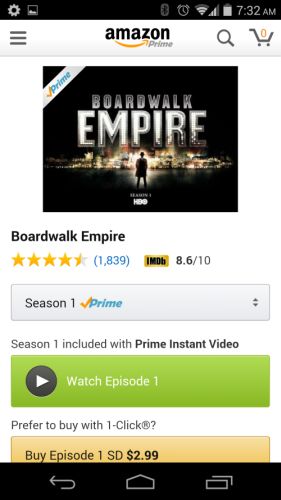 You’ll actually need two or three different apps. First, there’s the Amazon app which up until now has basically been little more than a shopping tool. You can grab the latest version from the Google Play Store.

Second, you’ll need the Amazon Appstore for Android. That’s because the third app — the Amazon Instant Video app is only available from Amazon’s store. You can’t get it from the Google Play Store.

You can also now use the Amazon app to shop for most digital goods sold through Amazon as well as physical goods. You can buy Kindle eBooks, videos, and apps. Interestingly it looks like Amazon MP3 content is not included… you’ll still need the Amazon Music app for that.

Video playback looks great on my Google Nexus 5. My only gripe (other than the need for 3 apps) is that there doesn’t appear to be Chromecast support.

Update: If you can’t find the latest version of the Amazon app in the Play Store, here’s a workaround that seems to work on devices that might not be officially supported yet: Download and install the Amazon Appstore manually and then use that to download the Amazon and Amazon Instant Video apps.

Amazon also offers an Instant Video app for iOS which only requires a single app. And you can use Amazon Instant Video on any of Amazon’s Kindle Fire tablets.