Amazon recently launched its first live video program, a fashion show called Style Code Live, which you can watch in a web browser or on an Amazon Fire TV device.

Theoretically, most online video streaming services that can begin playing content on demand when you hit a button should also be able to show live program that’s streaming to everyone at the same time. But Amazon may soon to make it easier for Fire TV users to find live shows… which suggests that the company expects there to be more live shows for Fire TV users soon. 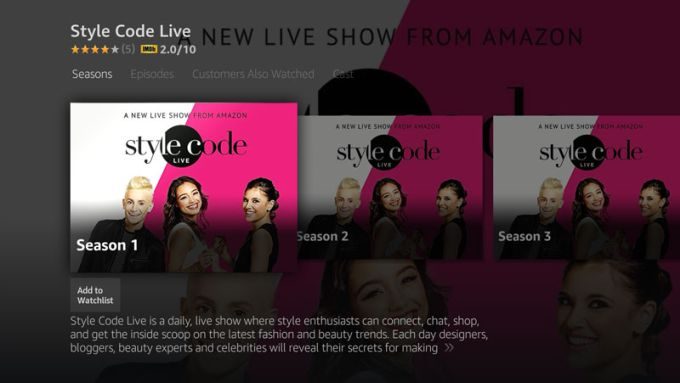 Digging around in the code for a recent Fire TV software update, AFTV News discovered some mentions of new buttons and styles for designating “Live Channels” and “Live Stations,” and programs that are “On Now,” as well as “Watch Live” buttons.

Worried that you might miss an episode? It looks like you’ll still be able to watch episodes after they air, since shows will also display an “Original Air Date,” suggesting you’ll be able to watch on-demand after the original broadcast has concluded.

It’s a bit early to say whether this means we’ll see more live shows like Style Code Live or if it opens the door for live streams from TV networks… although the latter option is certainly possible. There are already a handful of services that allow you to stream live TV programming without a cable box, including Sling TV and PlayStation Vue.

Interestingly, both of those options are available through Fire TV apps. But maybe Amazon will launch its own live TV service soon… or expand its add-on subscription service (which currently lets you pay for Starz, Showtime, and other channels through Amazon) to include third-party live TV streaming services.

There’s no telling exactly when the new live TV features will be enabled. AFTV News notes that it looks like the features are still a work in progress.