The Amazon Fire TV is a box that you can plug into a TV to stream online videos, play games, or run other apps on a big screen. It comes with a remote control, but you can also use a mobile app on your smartphone to control the Fire TV.

Soon you may also be able to do something else with your phone: find content you want to watch and “fling” it to the Fire TV.

Amazon has just released an Amazon Fling SDK which lets developers create Android and iOS apps that can stream music, video, and pictures from a phone to a Fire TV. 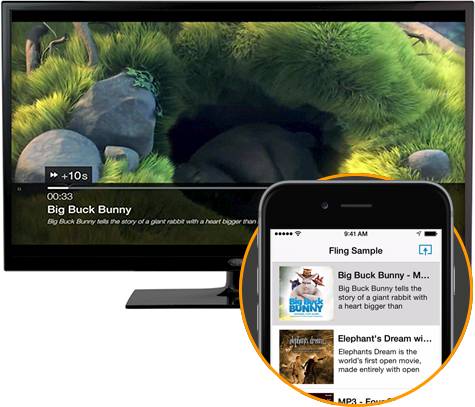 The SDK provides a way for apps running on your mobile device to find the Fire TV and communicate with it over a local network.

When you’re running an app that supports the feature, a fling icon will show up near the top of the app if a Fire TV is connected. Tap it and the media will star to play on the Fire TV. Once that happens you can use the Fire TV remote or your mobile device to pause, play, rewind, or skip tracks.

Some of the first apps to use the SDK include Karaoke Party and Rivet Radio. The karaoke app can display song lyrics on your TV while sending audio recorded on your phone to the TV. The radio app, meanwhile, lets you start listening to an online radio station on your mobile device and then switch to a TV with the tap of a button.

Google’s Chromecast media streamer has similar functionality. In fact, the Chromecast doesn’t even have a physical remote control: the only way to stream media to a Chromecast is to use a phone, tablet, or PC.

Amazon’s piggybacking on the Google Cast protocol by making it easy for developers who already support Google’s media streamer to add Amazon Fling functionality to their apps.