Amazon recently starting rolling out Fire OS 5.6.0 for the Amazon Fire, Fire HD 8 and Fire HD 10 tablets. Among other things, it includes an updated notification tray that shows icons for apps that want your attention rather than just a number showing how many notifications are available.

But folks who have tried installing apps from outside the Amazon Appstore have noticed another change in Fire OS 5.6.0 — the “install box” is grayed out when you go to install an APK file.

The good news is that there’s a very simple workaround. In fact, there are two options, and both work.

Update: The even better news is that workarounds are no longer necessary. Amazon rolled out an update in early December that fixes the grayed-out install button issue.

If you have a tablet running Fire OS 5.6.0 and you want to install apps that aren’t available in Amazon’s store, the first thing you need to do is go into the device’s settings, find the Security menu, and then toggle the switch next to “apps from unknown sources.” 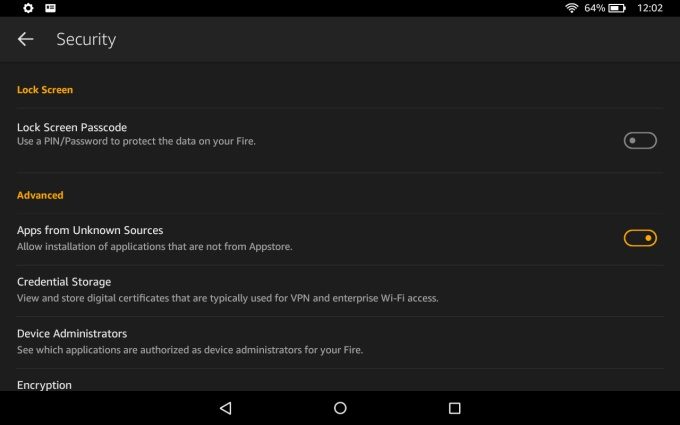 Next, find the APK you want to install, download it and run it. You’ll probably be greeted by an installer menu that doesn’t actually let you press the install button. 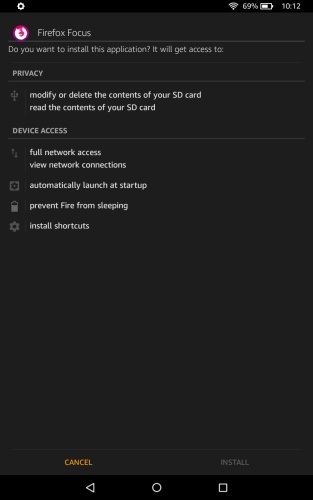 Here’s how to get around that:

You should see the same menu, but this time the install button should be orange. 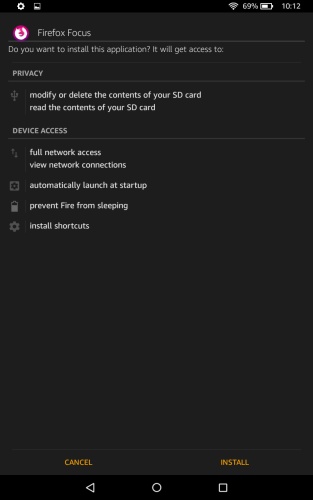 That’s it. Go ahead and install your app.

If, for some reason, you don’t want to use that method, there’s another option:

You should now be able to install your app.

If you’re looking for reliable alternatives to the Amazon Appstore, we’ve got a list of good places to look. Or you could try installing the Google Play Store. While it should take a few more clicks with Fire OS 5.6.0, the same method I used earlier this year should work.

In fact, since I already have the Play Store installed on my Fire HD 8 tablet, I’ve noticed that the easiest workaround for the unknown app problem is just to install apps through the Play Store. There are no extra hoops to jump through. The Play Store works just the same in Fire OS 5.6.0 as it did for Fire OS 5.4.