Amazon has a habit of launching new tablets in the fall… and blogger Dave Zatz has a habit of spotting upcoming Amazon products at the FCC website, in spite of Amazon’s efforts to hide its FCC listings.

So maybe it’s not surprising that Zatz has spotted what he thinks could be an FCC posting for a new Fire tablet. 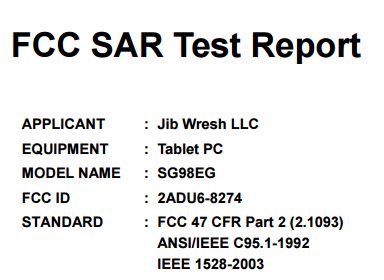 Amazon typically registers products under a shell company to make it tougher to spot unannounced products before they’re unveiled. But the company has a habit of naming those companies in interesting ways, using PO boxes and VoIP phone numbers, and generally creating companies that don’t look like real companies.

The end result? While I’ve never quite figured out how he does it, Zatz has successfully managed to find a number of FCC listings for Amazon products before they’re announced, including the Fire Phone, Amazon Dash buttons, and the Fire TV, just to name a few.

There aren’t many other details about the tablet… other than the fact that it’s the first Fire tablet to feature a microSD card slot. That’s a bit surprising, since Amazon has typically encouraged owners of its tablets to stream videos from Amazon Instant Video, music from Amazon MP3 and Amazon Prime Music, and generally use their devices for streaming rather than storing media. But either the company’s had a change of heart, or maybe the microSD card is only included for testing purposes and the consumer model won’t include a removable storage option.

Or maybe this just isn’t a Fire tablet. Of course, if it isn’t, there’s a good chance it’s something interesting. It’s unlikely anybody would name their company Jib Wresh unless they were up to something.