Amazon’s Fire tablets are arguably some of the best cheap tablets worth buying, thanks to a combination of decent displays, specs, and performance and low starting prices (which are even lower on Prime Day or during other sales).

But there’s a catch — Amazon’s tablets ship with Fire OS, which is a fork of Google Android. Among other things, that means they use the Amazon Appstore rather than the Google Play Store, and Amazon’s store has a much smaller selection of apps.

If you’re willing to risk hacking your tablet though, you may be able to install the Google Play Store, unlock the bootloader, install a custom recovery, and flash custom firmware to augment or even replace Fire OS.

Folks have been hacking Amazon Fire tablets for almost as long as Amazon has been selling them. But here are some of the latest resources for hacking the current-gen Fire tablets as of July, 2019.

Oh, and if you’re wondering what the differences are between Amazon’s current-gen tablets, scroll down to the bottom of this article for a comparison chart. 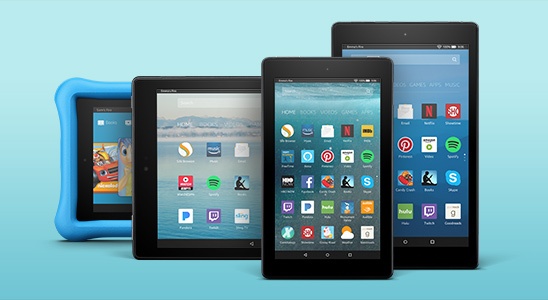 Want to install an app that’s not available from the Amazon Appstore, but don’t want to risk futzing with the built-in software too much? The simplest option may just be to sideload the app.

To do that, just slide down the notification tray in Fire OS, click the Settings icon, and scroll down until you find a section labeled “Security” or “Security & Privacy.” From there, you can toggle the option that says “Apps from Unknown Sources.” 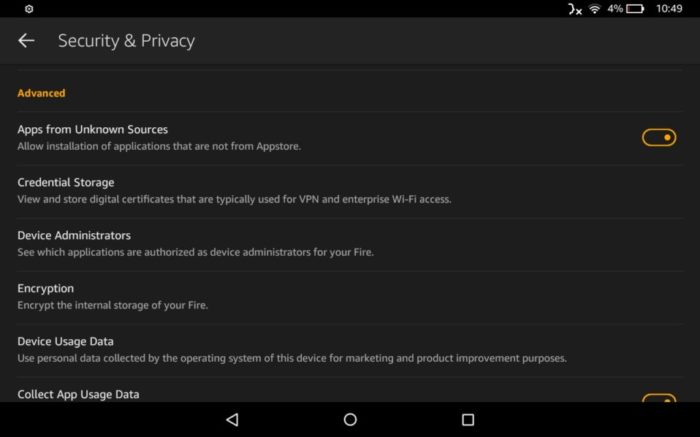 Once that’s done, you should be able to download Android apps just about anywhere and install them on a Fire tablet. Check out Liliputing’s guide for installing apps without using the Play Store to find some good places to start.

But not every Android app will work if you try to install it this way. For example some Google apps such as Google Maps, Gmail, and Google Drive will only work if you have the Play Store and Google Play services installed.

The good news is it’s generally pretty easy to install those prerequisites without rooting your tablet or unlocking its bootloader to install a custom ROM. But if you want to do those things, there are ways to do so for most recent Fire tablets.

Important note: Keep in mind that unlocking the bootloader will wipe all data on your device, so make sure to backup anything important before starting.

And while there are methods for recovering a “bricked” tablet listed in some of the links below, note that there is always some risk involved in hacks that involve unlocking the bootloader, so proceed with caution. The Google Play-only hacks are relatively easy to reverse by either uninstalling the apps you’ve installed or by performing a factory reset to wipe all your personal data and apps.

It’s Amazon’s cheapest tablet, with a $50 starting price, and it lacks an HD display or 64-bit processor. But it’s also the first Fire tablet to support microSD cards up to 512GB, so that’s something I guess.

It ships with Fire OS 6.3 which is based on Android 7.1 Nougat. And shortly after it began shipping, hackers figured out how to unlock the bootloader, root the tablet, and install custom ROMs.

Here are some recent resources for getting started with Fire 7 hacking:

Theoretically once your bootloader is unlocked, you can flash custom firmware including custom ROMs that would replace Fire OS with stock Android or other operating systems. But I haven’t seen any custom ROMs for the 9th-gen Fire 7 tablet (code-named “Mustang”) yet. That could change in the future.

It’s also one of the only current-gen Amazon Fire tablet that supports 10-finger multitouch input rather than 5-point touch input. The microSD card reader tops out at 400GB and WiFi tops out at 802.11n speeds (only the Fire HD 10 supports 802.11ac). But it’s hard to find a better tablet in this price range… at least in terms of hardware.

As for software, this tablet originally ships with Android 7.1-based Fire OS 6.x firmware, but hackers have founds several ways to root & unlock the tablet. Like other recent Fire tablets you don’t need to do that if just want to install Google Play though. Note that these steps

Here are some resources:

How to install Google Play on the Amazon Fire HD 8

This model does have a few limitations though, including a microSD card reader that tops out at 256GB cards, a 0.3MP front camera (and 2MP rear camera), and an older version of Fire OS (based on Android 5.x Lollipop).

With a starting price of $150, it’s also the most expensive member of the Amazon Fire lineup. But it’s often on sale for less than that.

Here are some of the latest hacking resources for the 7th-fen Fire HD 10: