Amazon is done giving away a different free Android app every day. But the company’s not done with Android freebies: instead the company has launched a new shopping app called Amazon Underground that lets you use your smartphone to shop for just about anything Amazon sells… and which also includes “over ten thousands dollars in apps, games and in-app items that are actually free.” 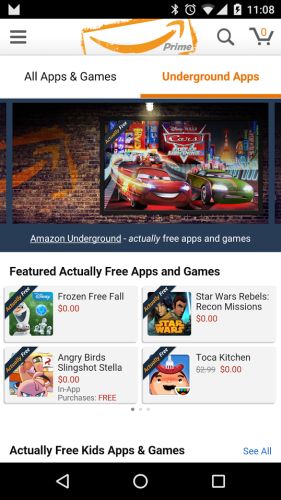 The Amazon Underground app includes a section for Underground Apps, where you’ll find free versions of apps you’d normally have to pay to use. Not only are the apps free, but there are no in-app fees, because Amazon has worked out a deal with developers to pay them on a per-minute-paid basis.

That means you won’t have to pay for extra lives, power ups, or other items.

Some of the games that are currently offered include Star Wars Rebels: Recon Missions, Angry Birds Slingshot Stella, Frozen Free Fall, and Goat Simulator. Some games, such as Duck Tales Remastered, normally sell for as much as $10.

Note that you’ll need to have the Amazon Underground app installed on your phone to play those games: you can’t install the store just to get free apps and then uninstall the store once they’re downloaded, because the games will stop working.

You can install Amazon Underground by visiting Amazon.com/Underground in your web browser on an Android device. If you already have the Amazon Mobile shopping app installed, Underground will replace it. And if you have a Fire HD tablet, you don’t need to install anything new: the Underground Apps should show up in the Appstore automatically.

Interestingly, Amazon continues to offer paid versions of some of the same apps: There are paid and free versions of Disney’s Castle of Illusion, for example. As AFTV News notes, there do seem to be some restrictions on the free versions: some cannot be installed on Fire TV devices, for instance.

While you can find the free apps in the Underground Apps section of the new Amazon Underground app, you may also spot them from time to time while browsing for other apps. You’ll know the free apps when you see them because they’re marked with a banner that says “Actually Free.”