What made Amazon’s Echo line of products special when the company launched its first smart speaker in 2014, was the idea of voice as the only real user interface. Put an Echo in your home and then just tell it when you want it to play music, read you the news, provide weather updates, answer questions, or control your smart home gadgets. There’s no need to pull out your phone, press a button, or even get close to the speaker.

But sometimes it’s still nice to have a screen to display visual information. So Amazon launched the $230 Echo Show earlier this year. It’s not the prettiest consumer electronics gadget I’ve ever seen, but it’s basically what you’d get if you slapped a 7 inch touchscreen display on an Echo-style device.

Now Amazon is launching something smaller, cheaper, and generally cuter. Technically the $130 Echo Spot is sort of like a smaller Echo Show with a round display. But less might be more, because the Echo Spot looks like a pretty great, if not exactly cheap, smart alarm clock… assuming you want an always-listening Amazon device in your bedroom.

Amazon unveiled the Echo Spot in September, and it’s been up for pre-order ever since. It ships starting December 19th. 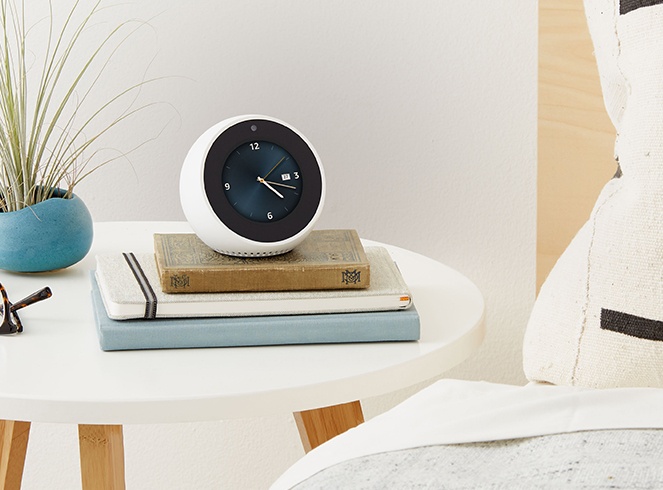 Early reviews are in, and it seems like people like the Echo Spot. Gizmodo says it’s a “good as hell alarm clock.” Slashgear calls its “Alexa’s cutest container.” And TechCrunch’s Brian Heater says it’s his “new favorite Alexa device.”

Of course it’s not perfect. The 1.4 inch speaker isn’t going to sound as good as the 2.5 inch woofer and 0.6 inch tweeter on the standard Echo or the stereo 2 inch speakers on the Echo Show. Reviewers suggest that the Echo Spot does sound better than Amazon’s cheapest Alexa device, the Echo Dot.

In other words, it sounds good for a clock radio but it’s not a HiFi replacement. There is a line out though, if you want to plug in headphones or an external speaker.

And the 2.5 inch round display is perfect for displaying watch faces or information cards. But widescreen videos for news updates, movie trailers, and other content look tiny, since they don’t even fill the screen.

Oh, and another problem? There’s no YouTube support at the moment. To be fair, that’s not Amazon’s fault, it’s Google’s. And the issue could be resolved in the future. But if you were hoping to watch short clips or listen to music from one of the world’s most popular video sites, the Echo Spot can’t do it… for now.

CNET concludes that the Echo Spot is a decent device, but it’s limited functionality makes it unclear if you really need an Alexa device with a touchscreen. Amazon offers several speaker-only models for lower prices, and odds are that you’ve already got a touchscreen phone and/or tablet anyway, right?