As expected, Amazon is adding a new Echo device to its line of products featuring the Alexa voice service. The Amazon Echo Show can do everything the company’s other smart speakers can… but it also has a 7 inch touchscreen display and a camera, which allow it to do even more.

For example, you can view weather forecasts, watch videos, make voice or video calls, see song lyrics, or use the Echo Show as a baby monitor, just to name a few possibilities. 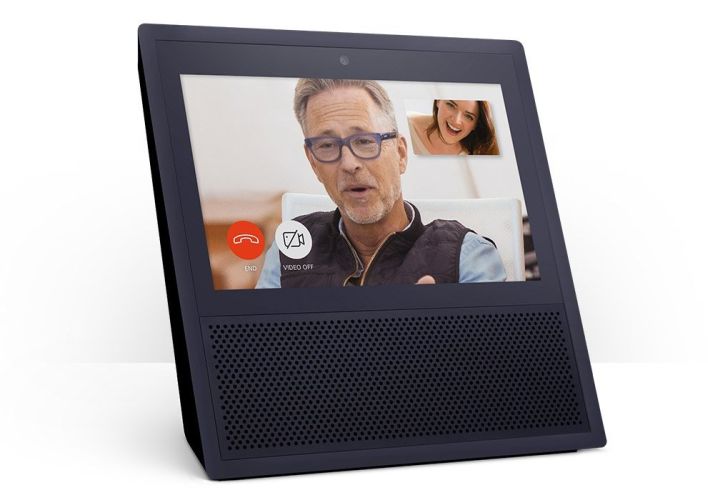 In some ways the Echo Show is basically a tablet that’s not particularly portable. Amazon has already added Alexa capabilities to its Fire tablets, so many of the “new” features are already available on a device that costs as little as $50.

But the Echo Show has a better speaker, better microphones, and basically it’s meant to fit into the same niche as other Echo speakers: it’s designed for hands-free operation, allowing you to ask questions, control media playback, or even control smart home products (like lights and thermostats) with your voice. It’s just that now you also get visual feedback as well as audio feedback.

The big speaker should allow the Echo Show to sound a lot better than a tablet. And the 8 built-in microphones allow for beam-forming and noise-cancellation so that the Echo Show can pick up your voice from anywhere in a room, unlike a Fire tablet.

One of the more anticipated features is the ability to make voice and video calls, but so far the Echo Show has limited telephony capabilities. You can make a call or send a message to anyone else using an Echo or a device with the Alexa app. But you can’t place calls to phones. It’s possible that feature could come in a future software update though.

One concern some folks have expressed about the Echo and similar products is that it’s kind of creepy to have an always-listening microphone in your home. Add a camera and that concern could be amplified. Amazon says it’s addressed this by adding a button that lets you turn off the mic and camera. A red LED light will indicate that both are turned off.

You can also call Amazon customer service to de-register your device from calling and messaging if you don’t want to use the service at all.

Amazon is also running a promotion for folks interested in buying 2 Echo devices: you can save $100 when you use the coupon code SHOW2PACK, so you get 2 devices for $360.