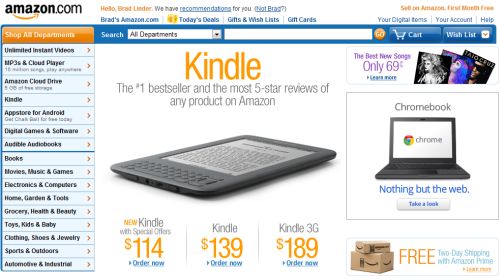 There’ve been rumors floating around for the past few months that Amazon could be preparing an Android tablet that would presumably ship with the Amazon Appstore, Amazon Kindle, Amazon MP3, and other Amazon-branded services. When asked flat out about the project by the folks at Consumer Reports, Amazon CEO Jeff Bezos said “stay tuned” for more information on the company’s plans.

That’s not exactly an acknowledgment, but it’s far from a denial.

Bezos also suggested that an Amazon tablet wouldn’t replace the company’s Kindle eBook readers. That makes sense, because while you can certainly read eBooks on a tablet device, you don’t typically get the high contrast E Ink display or battery life that’s measured in weeks rather than hours with most tablets. While Barnes & Noble has had quite a bit of success with its NOOK Color eReader/tablet, the company continues to offer the original E Ink NOOK as well.

In related news, Bezos says we won’t be seeing a Kindle with a color E Ink display anytime soon.