Amazon is rolling out a software update for its 2017 tablets and, among other things, it adds support for using the Alexa voice service without touching your tablet. 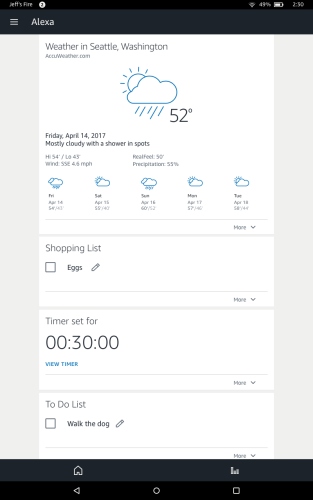 Here’s how it works: you can enable or disable Alexa hands-free mode by tapping an icon in the Quick Settings panel (swipe down from the top of the screen to see it).

This basically lets you turn Amazon’s $50 and up tablets into Amazon Echo-style devices that you can interact with by voice even when the screen is off and you aren’t touching the tablet. Well, sort of.

There are a few restrictions to keep in mind:

Still, it’s nice to have the option of using Amazon’s voice assistant software without first having to unlock your tablet and press a button.

Amazon’s US support page doesn’t mention Fire OS 5.6.1 yet, but there are details about the update at Amazon.de and Amazon.jp has a download link if you want to sideload Fire OS 5.6.1 before an over-the-air update is pushed to your device.

Oh, and if you’ve previously installed the Google Play Store and other Google apps and services on a Fire 7 or Fire HD 8 and were worried that the next Fire OS update would cause them to stop working, a few folks at xda-developers who have already received the update and report that Google Play continues to work after Fire OS 5.6.1 is installed.