Amazon says there are nearly 3 times as many apps available for download from the Amazon Appstore as there were a year ago. Folks with a Kindle Fire tablet now have access to 240 thousand apps.

That’s still far less than the million or so apps available for other Android devices from the Google Play Store. But since Amazon’s tablets don’t have access to the Play Store (unless you root them and sideload it), it’s nice to see that Amazon’s store is playing catch up. 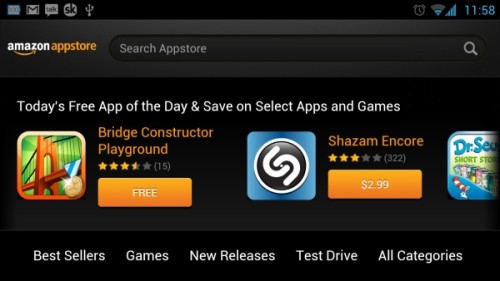 Amazon is expected to unveil its first smartphone on June 18th. The ever-expanding size of the Amazon Appstore could help that phone remain competitive with other Android devices.

While Amazon’s tablets run a custom version of Android, the Fire OS operating system is tightly integrated into Amazon’s own digital media and payment services. Since the operating system is a fork of Android, Google doesn’t allow Amazon to use Google apps such as the Play Store or Google Maps. It’s not clear Amazon would use them even if it could… the company makes its money by selling content to customers, not by selling relatively inexpensive hardware.

You don’t need a Kindle Fire to use the Amazon Appstore. You can also load the store onto pretty much any Android phone, tablet, or TV box if you want to take advantage of Amazon’s perks including the free app of the day. Just note that if you ever uninstall the Amazon Appstore, any apps you’ve downloaded from it will stop working.

One reply on “Amazon Appstore now has 240 thousand apps”