There are an estimated 2.8 million apps and games in the Google Play Store, and 2.2 million in Apple’s App Store. A few years ago Amazon really wanted to encourage developers to submit their Android apps to the Amazon Appstore… and to get people to actually use the app store. So after years of offering a “free app of the day,” the company did something unusual: it launched a service that let you access thousands of apps free of charge.

Now the company has announced the Amazon Underground Actually Free program is coming to an end... although it’ll be a bit of a phased shutdown. 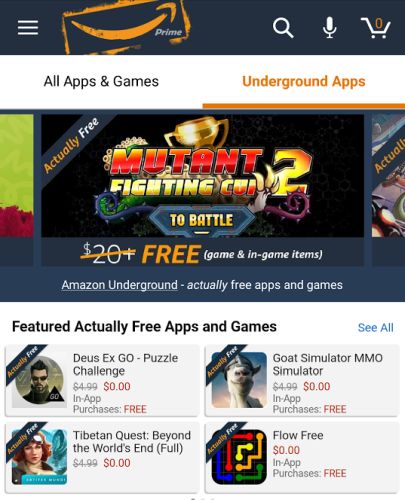 Amazon’s Appstore is available on Fire tablets and Fire TV devices, and it’s also available for download on most other Android phones and tablets… but there wasn’t really much reason to install the Amazon Appstore on a third-party device if you already have the Google Play Store. So Amazon gave you a reason by dangling free apps and/or free in-app purchases. Sure, you had to put up with some ads, but developers got a cut of revenue from those ads and exposed their apps to a wider audience.

Now Amazon says there are more than 800,000 apps and games in the Amazon Appstore and more ways for developers to make money. SO it’s shutting down the program.

If you’re using an Android phone, you’ll lose access to the Underground Actually Free store sometime in the summer of 2017. But any apps you’ve previously downloaded will continue to work until the program ends in 2019.

Amazon Fire tablet users will have full access to both previously installed apps and the store until 2019, which means they’ll be able to install, uninstall, and reinstall apps for at least the next year and a half. But if you’ve got an Android phone and using the Actually Free app service, you might want to download your favorite games and save them sooner rather than later.