Amazon launched its Appstore for Android well before the company had its own Android tablets to sell. You can install the Appstore on nearly any Android phone or tablet (in the US and other supported countries) and use it to download, install, and keep apps up to date.

But it looks like use of the Appstore really took off after Amazon started selling Kindle Fire tablets. Today the company says app downloads are up 500-percent from last year. 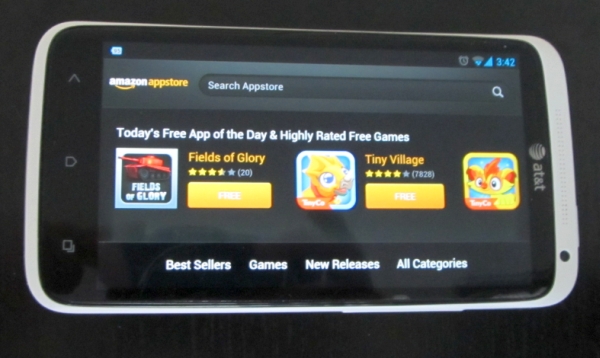 Amazon isn’t spilling the beans on actual numbers… so all we know is if 1 app was downloaded last year, the number is 5 this year. But it still sounds like things are looking up for the Appstore.

The Amazon Appstore nice little alternative to the Google Play Store if you have a device that doesn’t support Google’s app marketplace… or if you’re looking for bargains. Every day Amazon offers a free app of the day, which is an app that normally costs money, but which is being offered at a 100% discount.

On the other hand, there are over 700,000 free and paid apps available from the Google Play Store — including nearly every app that’s available from Amazon’s store. So if you have a device that does support Google’s store, there’s not a heck of a lot of reason to use Amazon’s alternative except for when you’re bargain hunting.

In other words, it’s likely that almost all of that 500-percent increase in downloads is due to Amazon Kindle Fire and Kindle Fire HD sales. On those devices, the Amazon Appstore is the only official way to install third party apps and games.

Once you’ve purchased an app on your Kindle Fire, you can also always install the Appstore on your phone or other Android devices in order to download it again at no additional charge.

2 replies on “Amazon Appstore downloads are up by 500-percent”