The Kindle Paperwhite is Amazon’s first Kindle eReader with a front-lit E Ink display and a high resolution 758 x 1024 pixel display. The new display resolution makes text look sharper than on any previous models, and the light lets you read in the dark.

But not everyone is happy with some of the changes Amazon made when moving from last year’s Kindle Touch to this year’s Kindle Paperweight… and now Amazon has posted a page acknowledging some of those pages so that potential customers won’t be caught unaware. 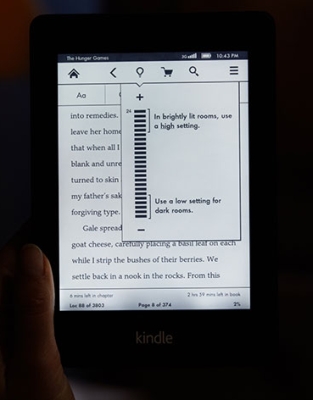 eReader. The link takes you to a new page where Amazon acknowledges three “design decisions.”

That last one has caused many users to complain — not necessarily just because the light doesn’t shine evenly, but because all of Amazon’s promotional materials up until now had suggested that the screen would look equally bright in every area. It doesn’t.

At the bottom of the screen you’ll see some dark areas, which can be distracting. That’s also true if you use an old-school booklight. But if you were expecting the Kindle Paperwhite screen to look like a back-lit LCD display, you’ll be disappointed.

I’m holding onto the Kindle Touch I picked up last year, because I use the text-to-speech capabilities more often than I would have expected when I first bought it — and also because it still works perfectly well. I am tempted by the new model’s front-lit display, but I suspect if I hang onto my Kindle Touch for a while, something even better will be available by the time I’m ready to replace it.