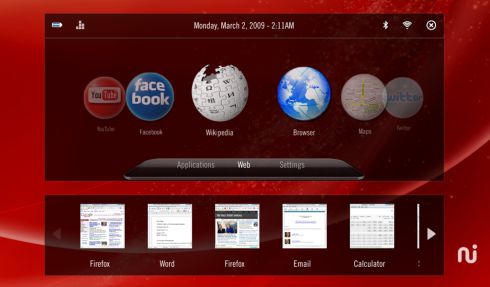 The Always Innovating Touch Book is a unique little device that blurs the line between a netbook and a tablet-style UMPC. For $299 you get a low power, touchscreen computer with a custom Linux user interface. Another $100 gives you a base station with a built in keyboard that transforms the whole thing into a mini-laptop with an 8.9 inch touchscreen display.

Always Innovating recently posted the first screenshots of the computer’s Linux interface. The company still describes the software as beta, which mean it may still be rough around the edges, even though the TouchBook is already shipping. For the most part, the operating system looks like a typical Linux OS using the GNOME desktop environment. It comes with an array of light weight applications including the Gnumeric spreadsheet app and an MPlayer frontend for playing video files.

As you can see from the screenshot above, there are also a few areas that have been tweaked to make it easier to find and launch programs on a small, touch-friendly screen. For one thing, there’s a custom program launcher and list of running applications. The device also ships with the Fennec web browser instead of Firefox. Fennec is the pre-release codename for an experimental version of Firefox built for mobile devices like cellphones. As such, it’s designed to be more touch-friendly than Firefox, but it still uses the same rendering engine, so web pages that load in the desktop version of the browser should render properly in Fennec as well.

The TouchBook has a low power TI OMAP3530 CPU, 256MB of RAM, and 256MB of flash storage. It comes with an 8GB SD card for additional storage. The netbook comes with Bluetooth 2.1, 802.11b/g/n WiFi, and 7 USB ports (including a few on the inside of the device for peripherals that will always stay connected).