Update: This project may be dead in the water. See below.

The Allwinner A10 is a low power ARM Cortex-A8 processor with Mali 400 graphics. It’s used in a number of inexpensive Android tablets, including most of Coby’s latest devices. But it’s also a popular chip for Android-powered set-top-boxes (or mini PCs) such as the MK802, Mele A1000, or Mini X.

You can pick up any of those little boxes for less than $100, hook up a keyboard, mouse, and TV, and play Android games, surf the web, and even stream video from Netflix. The little boxes also run Ubuntu, Fedora, and other desktop Linux operating systems surprisingly well.

One thing they don’t do very well at the moment is run XBMC — a popular media center application meant to turn a PC, game console, or other device into a media center companion for your big screen TV. 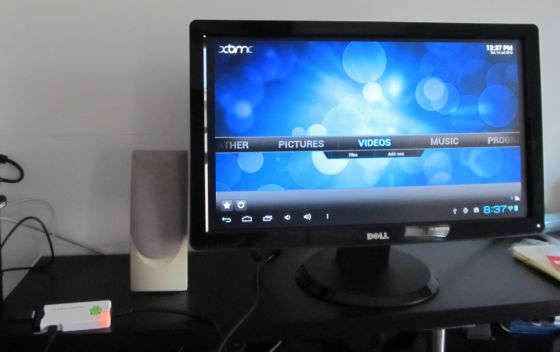 That’s largely because the XBMC developers don’t have access to all the code needed to take advantage of all the features in the Allwinner A10 chip. The processor can handle HD video playback and hardware-accelerated 3D graphics. But if you try to run the pre-release version of XBMC for Android on an Allwinner A10 device, videos look more like slideshows than movies at the moment.

But there could soon be a better way to run XBMC on an Allwinner A10 devices. Members of the XBMC developer community have been contacting Allwinner seeking support for developing a version of the media center that works with the processor — and now they’ve received a response.

Allwinner is sending emails to at least some of the more than 120 people that have contacted them about the project, and will work to support “standard firmware like XBMC,” which could mean modifying some of Allwinner’s framework to do that.

Update: One of the developers attempting to work with Allwinner says the chip-maker hasn’t exactly been helpful since the initial announcement, and the project appears to be going nowhere.  There are still efforts to create working drivers by reverse engineering the existing solution, but there’s no telling if or when that work will be completed.

It’s still not clear exactly what will come of this — but hopefully it means developers will be able to get a fully functional version of XBMC for Linux up and running on devices like the Mele A1000 and MK802. It may also mean that other projects beside XBMC may be able to use the tools Allwinner makes available to improve graphics support for other applications.