Chip maker Allwinner’s processors may not be popular with tablet makers these days, but the company’s chips continue to power a number of TV boxes, and the company’s taking aim at new markets such as VR headsets.

The company recently launched three new processors that could be used in a range of applications. The Allwinner R16 and R40 are quad-core chips ARM Mali 400 graphics, and the Allwinner R58 is an octa-core processor with PowerVR SGX544 graphics. 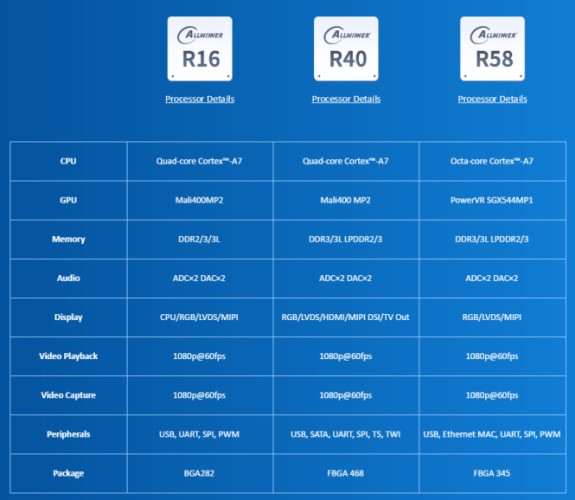 As CNX Software notes, one of the most interesting features is SATA support in the Allwinner R40. This should allow you to connect a laptop or desktop-style hard drive or SSD to a system featuring this processor, which could come in handy in a laptop, TV box, or mini PC.

While the Allwinner R40 processor isn’t exactly a powerhouse, it’s a step up from the Allwinner A20 dual-core processor it’s meant to replace. Not only does it feature twice as many CPU cores, but it’s also a 40nm chips instead of a 55nm processor, which should mean better performance and lower power consumption.

Like all of the other chips in the R series, the Allwinner R40 features ARM Cortex-A7 CPU cores. This particular model supports 1080p 60fps video encoding and decoding, Ethernet, USB 2.0, and HDMI, among other things.

The Allwinner R16 is positioned as a low-cost solution for IoT applications, with support for Android or Linux-based software. And the octa-core Allwinner R58 is a more powerful solution that the chip maker is positioning as a solution for 2-in-1 laptop/tablet hybrids.

The R58 chip supports higher screen resolutions (up to 2048 x 1536 pixels, or dual-display 720p screens), and has a few other features aimed at higher-performance systems. But it lacks SATA support.