Virtual Reality systems are still in their infancy, but right now some of the most popular models are basically Google Cardboard-style headsets that you slide a phone into and Oculus Rift/HTC Vive-style headsets that are designed to connect to a PC or game console.

But recently we’ve started to see a handful of all-in-one VR systems that offer the same kind of functionality you’d get from a phone+Cardboard solution, but without the inconvenience of having to constantly insert and remove your phone.

There are a few reasons I’m skeptical of that approach for now, but Chinese chip maker Allwinner figures that in a few years this will be the most popular type of VR system. And the company is showing off one of its early products for the space. 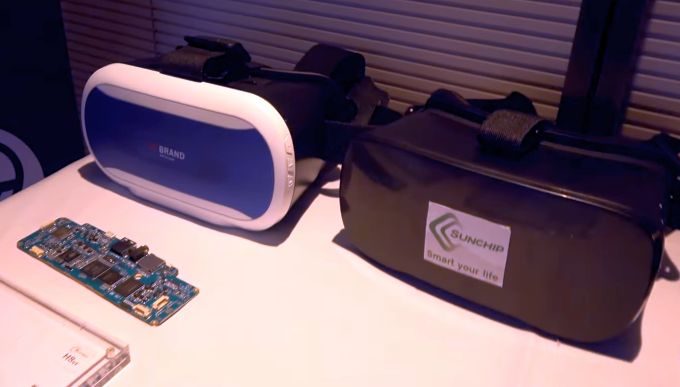 The Allwinner H8vr is a system-on-a-module designed for VR headsets. It’s basically a smartphone-like board that features an Allwinner H8 octa-core ARM Cortex-A7 processor with PowerVR SGX544 graphics, 2GB of RAM, and 16GB of storage.

Allwinner says the system can decode 4K video at 60 frames per second and it can be used in headsets with high-resolution displays. Throw in a 3,000 mAh battery and you should get around 3 hours of battery life while using VR or 360-degree content.

For now, Allwinner says it’s focusing on video playback functionality, because mobile chips just aren’t good enough to deliver the same kind of experience you’d get from an Oculus Rift or Sony PlayStation VR-style headset. But that could change in a few years as mobile GPUs get better.

The company plans to add support for mobile VR games with the launch of its VR9 platform later this year, and the company already has a VR10 chip scheduled for 2017, with improved performance, lower power consumption and integrated LTE support.

At that point, it might be worth keeping an eye on this all-in-one VR device space. But I’m not really sure how big the market is for early entrees into this space, since products like the Pico Neo and DeePoon M2 cost almost as much as a phone + headset. Paying for one is kind of like buying an extra phone that you probably won’t use nearly as often as your phone.