AllCast is an app that lets you stream videos, music, photos, or other content from an Android phone to a TV. You can use it with just about any TV connected to a Roku, Apple TV, WDTV, Xbox, or some other Samsung or Panasonic Smart TVs or devices with DLNA renderers.

Now AllCast also has official support for Google’s Chromecast, which means that with a $35 device you can beam all sorts of content from your phone or tablet to your TV. 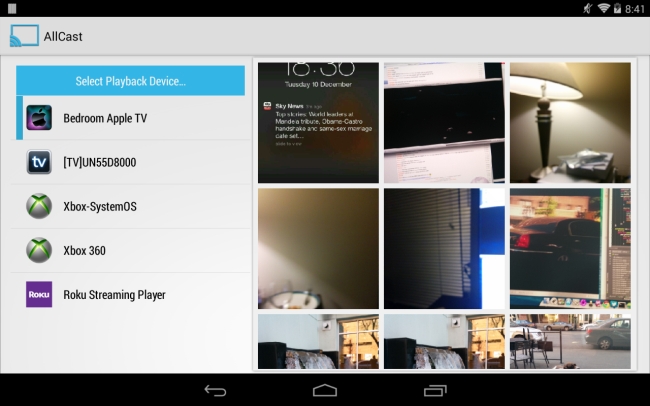 AllCast developer Koushik Dutta actually created the app with the Chromecast in mind. But it was developed before the official Chromecast SDK was released, so for a while it supported just about every major media streaming device except the Chromecast.

Now that there’s an official Google Cast SDK, Dutta says it only took about 20 minutes to add Chromecast support.

Google originally positioned the Chromecast as a device that lets you stream music, videos, and other content from the internet. You can use your phone, tablet, or PC as a remote control, but content actually comes straight from online services such as Netflix, YouTube, or Hulu Plus. That way you can turn off your mobile device or surf the web, play a game, or do just about anything you’d like without interrupting the media playback.

AllCast works a little differently by letting you stream content from your device’s storage. That means you can show home videos (or downloaded videos) by streaming them over your home network without uploading them to the internet first.

You can also use the app to stream content from Dropbox or Google Drive to your TV.

There’s a free version of AllCast, but it has a 1 minute viewing limit. If the free version works and you want to use the app to stream longer videos, AllCast Premium is available from the Play Store for $4.99.

5 replies on “AllCast updated: Streams anything from phone to Chromecast”