CyanogenMod and ClockworkdMod developer Koushik Dutta has been working for months on software to let you stream audio or video files from your Android phone or tablet to your TV. Now you can sign up to try his Allcast Beta app.

It’s available from the Google Play Store, but while it’s in beta you’ll need to sign up for a few testing groups on Google Plus and Google Play. You can find the details in Koush’s announcement. 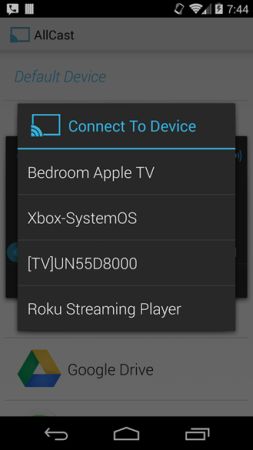 Allcast currently lets you sent videos to your TV over a local network using a Roku, Apple TV, Xbox 360 or Xbox One, Samsung Smart TV, or other device with DLNA support.

One device that doesn’t currently work with Allcast is the Google Chromecast. Allcast actually began its life as an app that Koush developed to stream local content from Android phones and tablets to a Chromecast, but Google’s software developer tools for Chromecast are still unfinished (and in flux), and Allcast currently doesn’t work with the $35 media streaming device.

Koush says if Google does open up the API, he’d like to add Chromecast support in the future.