Developer Koushik Dutta has been working on an Android app since this summer called AllCast that lets users stream photos, videos, and other content from a phone or table to a TV using a game console, Roku, Apple TV, or other box.

Now AllCast is out of beta and available from the Google Play Store. There’s a free version and a $4.99 AllCast Premium version which has no ads, splash screens, or limits on video length. 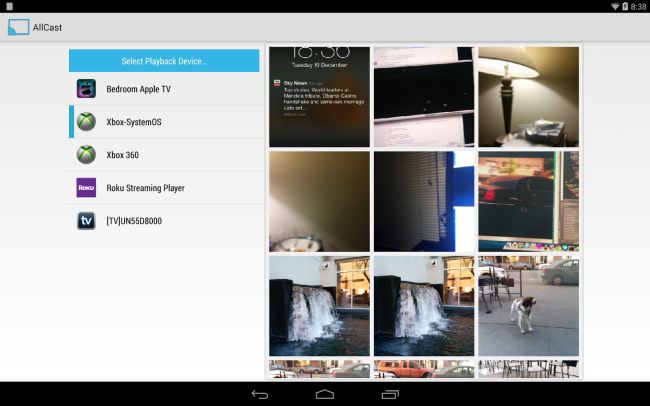 AllCast works with a variety of smart TV devices including Roku, Apple TV, Xbox 360 and Xbox One, Western Digital’s WDTV, Google TV boxes, and Samsung and Panasonic Smart TVs as well as devices with DLNA support.

Before spending money on the premium version though, it’s probably a good idea to download and test the free app to see if it works with your hardware.

One notable item that’s missing at launch is support for Google’s Chromecast. While early builds of AllCast were designed to work with Google’s $35 media streaming device, Google hasn’t released an official Google Cast SDK yet, and independent developers aren’t able to offer this sort of functionality yet.

You can still use a Chromecast to stream content from Netflix, Hulu Plus, YouTube, and other online media sites, or use Plex or another officially supported app to stream local content. But the process isn’t quite as simple as picking a video from your phone’s SD card and beaming it straight to your TV — something AllCast now lets you do with a Roku, Apple TV, or other supported device.