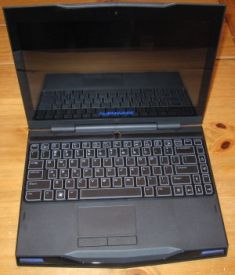 I’ve read a couple of reviews of the Alienware M11x gaming ultraportable recently. But Scott Kuban’s is the first I’ve seen that points out that the laptop not only can play Crysis at native resolutions, but the computer gets even faster if you overclock the CPU from the BIOS menu.

Out of the box, the M11x runs at 1.3GHz and has an NVIDIA GeForce GT 335M graphics processor that you can switch on or off depending on your needs. But you can adjust the processor to run at 1.73GHz which kicks things into higher gear.

So while running at 1.3GHz, the computer gets a 3DMark06 score of over 5600 (far higher than any Intel CULV or NVIDIA ION-based laptop I’ve seen to date), at 1.73GHz that score jumps up higher than 6400. In real-world settings, overclocking the CPU makes programs load faster and improves gaming performance a little bit.

I’ve seen several reports that suggest you’ll get about 2 hours of gaming time or 5 hours of web surfing out of the M11x battery. I asked Scott what kind of battery life he was seeing with HD video playback, and it turns out he gets almost 4 hours… whether the CPU is running at 1.3GHz or 1.73GHz.