Dell’s Alienware division released a new line of gaming laptops this week for folks that like to take their gaming machines with them. But the new Alienware laptops with 14 to 18 inch screens aren’t exactly the most portable laptops on the market. The smallest model weighs over 6 pounds, and the largest is about twice the weight.

But Dell has been looking into the portable gaming space, and Alienware is showing off some of the designs it’s considered for gaming tablets. 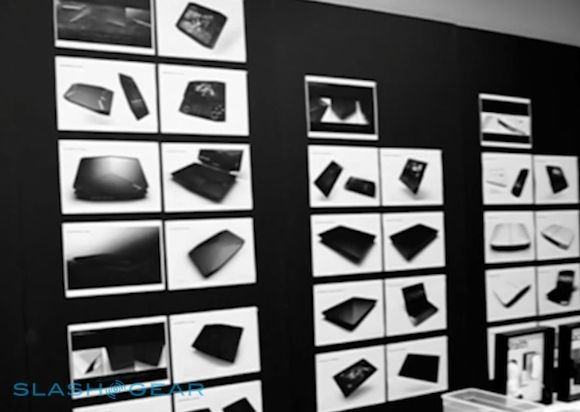 Right now the company doesn’t think the chips, batteries, and other hardware are up to the task of delivering a worthwhile gaming tablet. But that could change in the next few years, so Alienware was  thinking about tablets even as it designed its latest notebooks.

In other words, if and when the company does release a Windows tablet designed for gamers, it’ll probably carry some of the style associated with the company’s laptops.

Hopefully that doesn’t mean they’ll weigh 6 pounds and up.

What it could mean is angular designs, support for physical keyboards (that either slide-out or are detachable), and other elements that support PC games.

Not everyone’s convinced that gaming tablets aren’t ready for prime time yet. Razer is now shipping its first PC gaming tablet, and companies including Archos, NVIDIA, and others seem to think Android tablets for gamers are the way to go.

But the Archos GamePad can’t play Windows games, the NVIDIA Shield can only do it by streaming them from your PC over an internet connection, and the Razer Edge gets lousy battery life. Alienware’s decision to wait might make sense.

One reply on “Alienware looks at the gaming tablet space, sits it out for now”