While there aren’t many devices shipping with Gemini Lake chips yet, Intel, Shuttle, MSI, and Gigabyte have all unveiled mini PCs powered by the chips. Now you can add Alfawise to that list. 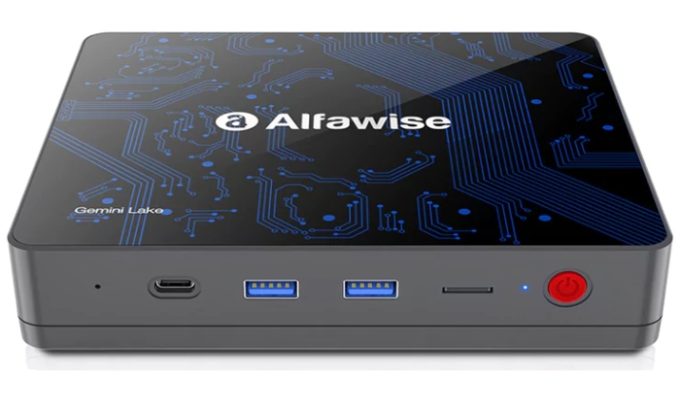 A new mini-desktop computer called the Alfawise T1 is up for pre-order from Gearbest for $220.

The computer measures about 6.3″ x 5.3″ x 1.3″ and features four USB 3.0 ports, a USB Type-C port, a Gigabit Ethernet jack, HDMI and VGA ports, a microSD card reader, and a headset jack. There’s also a built-in microphone for use with Cortana voice controls or other audio recording apps and support for 802.11ac WiFi.

If the case looks familiar, that’s because it appears to be nearly identical to the Apollo Lake-powered Beelink S1, which launched last year. The dimensions are the same, the ports, buttons, and expansion options are the same. The logo and picture on the top cover are different.

I’m not sure if Alfawise and Beelink are related or if they just buy their cases and components from the same supplier.

Anyway, it’s always nice to see another low-cost, low-power PC for folks looking to build a home theater PC, home server, digital signage system, or other device where size and price are more important than performance.

In related news, if you’re wondering how Gemini Lake stacks up against Apollo Lake, NUC Blog has a review of a new June Canyon NUC mini computer with a 10 watt Intel Celeron J4005 dual-core processor.

The short version is that it’s hard to compare entry-level NUC models because last year’s had a quad-core chip and this year’s has a dual-core processor. But while that means the Apollo Lake model comes out ahead in tests of multi-core CPU performance, the Gemini Lake CPU appears to be faster when it comes to single-core tasks. Gemini Lake also brings hardware-accelerated support for decoding 10-bit HEVC and VP9 videos at up to 4K resolutions, which could make it a better choice for home theater PC builders.

It’s also hard to compare the Alfawise T1 to those computers, since it has a 6 watt quad-core N-series chip instead of a 10 watt J-series processor. But the point is that all things being equal, a Gemini Lake processor should offer at least a modest performance boost over its Apollo Lake equivalent.

If nothing else, Alfawise’s promotional materials point out that the Celeron N4100 chip used in this computer has 4MB of L2 cache and supports burst speeds up to 2.4 GHz, compared with 2MB and 2.2 GHz for the older Celeron N3450 Apollo Lake chip.

Update: Ian Morrison reminded me that he also published a review of the Intel NUC7CJYSAL in March with more performance notes, comparisons with Apollo Lake, and information about running Linux on the Gemini Lake-powered PC.