Chinese device maker TCL’s most anticipated phone of Mobile World Congress is probably the BlackBerry KeyOne, which was unveiled Saturday. But TCL also makes and sells phones under the Alcatel brand, and the company has three new models on display at the show.

Two are budget devices that don’t really stand out all that much. But the third really does catch your eye… with bright flashing lights.

It’s called the Alcatel A5 LED and it’s a 5.2 inch smartphone that has an array of LED lights covering its back panel. 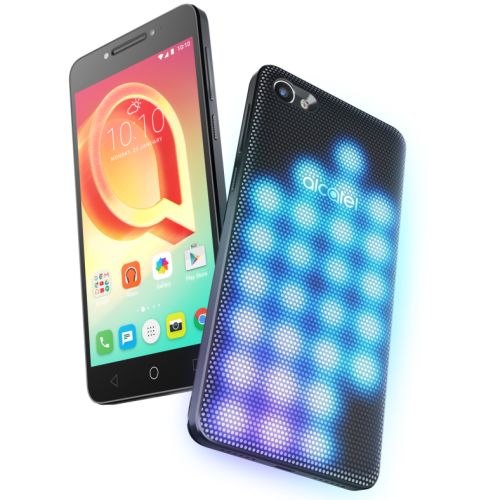 The Alcatel A5 LED lets you use the Color Catcher 2.0 app to design your own flashing color combinations to go with music playback or other experiences. You can also switch between patterns by shaking the phone.

Update: The Verge notes that the LED rear panel is removable, and Alcatel is showing off other panels including a speaker case and battery extender that can attach to the back of the Alcatel A5. So it might be a Moto Z-like modular platform… but right now Alcatel is making no promises to offer any modules other than the LED light panel.

The company’s other new phones include

The company hasn’t actually said what that will mean though, since prices will vary by region and US pricing details haven’t been released yet.